Irene Belserion was part of the Alvarez Empire as the strongest woman of the Spriggan 12, the protection guard of Emperor Spriggan. She also leaded the Irene Squad, her own personal squad, within the Empire. She was regarded as the "Scarlet Despair" and the "High Enchanter" in the Empire, due to her peerless magnitude of power. She is the mother of Erza Scarlet and the creator of the Dragon Slayer Magic. 15 years after her defeat and her death, she got found by Delta and got transported in a secret Base served as the Kara Organization headquarters. Put in a massive pod, she woke up after passing months in there and now, she serves as one of the Top Executives of the Kara Organization.

All previous abilities from her third key, Large Size (Type 0), Elemental Manipulation (Can shout Fire, Water, Lightning, Air, Steam, Bubble and Lava beams), Unconventional Durability Negation (Her dragon claws can now bypass the physical defense of a spiritual body), Reactive Evolution, Regeneration (Low-Mid: Regrew her arm after it got slashed to millions of pieces by Senjumaru's strings), Spatial Manipulation (Can slash through dimensions and bend space), Paralysis Inducement and Limited Body Control (Can manipulate her body so it can take the form she wants to and can paralyze people with her spit)

All previous abilities from her fourth key, Stealth Mastery, Conventional Resistance Negation, Power Nullification, Instinctive Reaction (Can clear her mind and prevent the situation without even thinking), Large Size (Type 5 to possibly 6; Is just as big as a planet), Stellar Manipulation via Deus Stella, Dimensional Travel and Portal Creation with Amenojitakara, Limited Madness Manipulation (Type 1) (Can induce insanity over certain conditions)

Multi-Continent level (Comparable to Ten-Tails Jinchuriki Obito. Easily contented Uryū and escaped his Antithesis. Even Kenpachi admitted that Irene posed a serious threat to him and that she'll be even more difficult to defeat than Gerard or Gremmy even with Bankai and his eyepatch off. Easily defeated Byakuya and Toshiro.) | Multi-Continent level (Absorbed the surface of the Earth with Universe One, which resulted 4 Exatons) | At least Multi-Continent level (Briefly fought with Senjumaru and Ichibe before getting overwhelmed. She needed to unleash her Dragon Form in order to stand a chance.)

Standard Equipment: A Staff: This large antlered staff is often used as a wand or melee weapon.

Intelligence: Irene is a highly intelligent individual (A prodigious enchanter with centuries of experience, good at reading people and will prepare for difficult opponents if possible). Can read and decipher a person's footsteps even from Kilometers away. Also, she can analyze her own senses in order to calculate the distance between her and something else. This gives her minor Instinctive Reaction, although it’s not applicable in combat. Gained the knowledge of her against Erza and Wendy to improve her own fighting style.

Weaknesses: As a dragon slayer, Irene should suffer extreme motion sickness when riding any form of transport.

Universe One (ユニバースワン, Yunibāsu Wan): Also known as World Reconstruction Magic (世界再構築魔法, Sekai Sai Kōchiku Mahō), Irene, by firstly enchanting the land, can manipulate the very geography of the ground itself, with the ability of compressing the land to as much as five percent (or less) of its original size, thereby altering the entire landscape. The true purpose of this Magic is the power of bringing certain things or people to specific areas and locations, for example pushing the Emperor to the Fairy Tail Guild where Fairy Heart is located, while vanquishing Acnologia to deep into the sea. There are major side effects, as the new age Magic teleports all the inhabitants of the area (including Irene herself) and even structures and landmarks randomly all over the affected area. An indication to its power lies in the area of effect and Zeref's shock at the fact that Irene would cast it in the first place. Irene calls this Magic one of "a new era," indicating that it was created rather recently and would thus be unknown to someone who has knowledge of all Magics of old, such as Acnologia. She also noted that the casting she performed against Acnologia was her first ever time using Universe One.

Eye Magic (眼の魔法, Me no Mahō): Irene has shown the ability to remotely view an area by summoning a giant eye in the sky over the location she wants to see and linking this eye with her true one. Both the giant eye and her real eye show a cross-shape pattern while the Magic is active.

Dragon Slayer Magic (滅竜魔法, Metsuryū Mahō): Irene possesses Dragon Slayer Magic, and was the one who created it for use in the Dragon King Festival. Her four hundred years of experience in said Magic allowed her to effortlessly, and almost masterfully, make use of Wendy's Sky Dragon Slayer Magic the very first time she tried using it. In her original body, it appears that Irene can only access her Dragon Slayer Magic while in her Dragon form, and although unclear what it specifically does, one benefit is that it allows her to magnify the power of her enchantments.

Enchantment (付加術, Fukajutsu): Irene has shown extremely high proficiency in the art of enchantment; so much that she's classified as a High Enchanter (高位付加術士ハイエンチャンター Hai Enchantā), evidenced by her ability to change and alter landscapes, climates, and the terra firma of the world, as well as manipulate the atmosphere, objects, people, even able to turn inanimate objects into fully functioning people or humans into animals. It's been noted by Zeref that she's prodigious when it comes to attaching and detaching Magic from objects, as seen when she offers to detach Fairy Heart from Mavis, something which should normally be impossible. However, due to Fairy Heart's complex nature, this task proves time consuming and delicate for even Irene.

Berserker (狂戦士バーサーカー, Bāsākā): Irene can enchant her target(s) into a monstrous form that increases all their basic parameters by incredible levels, but at the cost of the target(s) intelligence and reasoning.

Deus Zero (神の無加デウスゼロ, Deusu Zero): Irene has access to this enchantment, which allows her to extract Magic or other enchantments from someone. She originally used this to try and extract Fairy Heart from Mavis, and later used it on Wendy to detach her enchantment from Erza, but failed when Wendy also proved herself to be able to cast this particular enchantment.

Master Weapons Specialist: Although not using it for actual combat very often, Irene is proficient and dexterous enough with her staff to be able to read and parry Erza's sword swings on several occasions with absolutely no effort.

Flight: Irene has shown that she can fly to any location.

Master Sensor: Irene has shown to be able to sense presence of Mages to great extent and determine how strong they are without them being near her, as she could sense Crime Sorcière and Acnologia from a relatively long distance, unlike her subordinates.

Dragon Form: As her human form was given to her via an enchantment from Zeref, Irene can break the enchantment at her whim and re-assume her true form as a Dragon.

Dragon's Roar: Being a Dragon, so long as she has assumed this shape, Irene can spout destructive blasts from her mouth like the rest of the race, which can easily decimate an entire castle.

Spatial Manipulation: Irene can now manipulate dimensions on a limited cross-dimensional range and can cut through them.

Flight: While she can fly in her human form, Irene can also fly in this form, but in the more conventional sense.

Enhanced Magic Power: In her Dragon Form, Irene is the Sage Dragon (as Belserion gave her her power), and has her already immense Magic Power increased to much larger levels, which allows her to greatly increase the power of her enchantments.

Enhanced Enchantments: According to her, with the Sage Dragon's great power, Irene can increase the power of her enchantments to levels that no human could reasonably cast, something that transcends the land, the sky and the seas, and allows her to enchant the heavens themselves. These enchantments are of a higher rank than "High Enchants" (高位付加術ハイエンチャント, Hai Enchanto) and are thus known as "Master Enchants" (極限付加術マスターエンチャント, Masuta Enchanto)

Deus Sema (神の星座崩しデウス・セーマ, Deusu Sēma): Using the immense power gifted to her by transforming into a Dragon, Irene enchants a rather large asteroid in space to come crashing down to earth as a meteor. If the meteor were to strike the ground it would annihilate the entirety of the area surrounding the new location of the Fairy Tail Guild. Deus Sema is a higher ranked, stronger version of Jellal's True Heavenly Body Sema.

Shunpo: A Shinigami movement technique which allows the user to move faster than the eye can follow. As speed is the main factor of the technique, the method is best characterized by how fast one can get from point A to point B in the least amount of steps, thus giving off a similarity to teleportation.

Kidō: Spells cast by Shinigami with strong enough Reiryoku and Reiryoku control. Kidō is divided into mainly three categories: Hadō for attacks, Bakudō for battle support and Kaidō for healing. The spells are ranking from 1-99 with 1 being the weaker and easier spells to cast and 99 being the most powerful and difficult to cast. Skilled users can cast Kidō without the need of an incantation; however, casting without incantation does reduce the Kidō's effectiveness less than a third of its full potential. 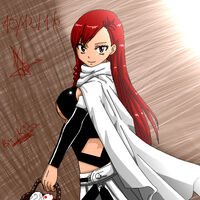 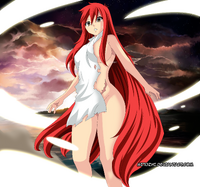 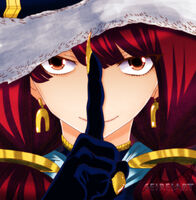 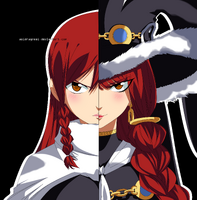