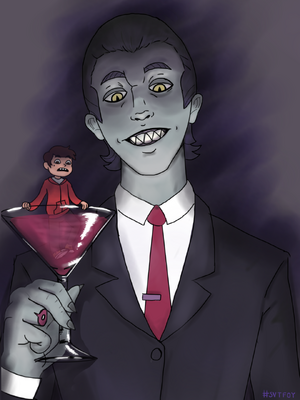 Infamous Blue or the Dragon God of Nightmares, is an intricate being of demonic depiction, whose first recorded mention was found in a nameless pre-historic tome, carved from a hardened raw material that has been speculated to be over 2.5 billion years old. He appears several times as a mythological figure in a variety of religions (e.g. the snake that tempted Eve, the Ouroboros, the Dragon who lures the Beast of the Earth, the Serpent of the Primeval Void etc.).

Infamous Blue is an obscure character that appears or was supposed to appear in several of Antydeth's stories. His role is interchangable as he can switch sides at a moment's notice or alter his motives and goals depending on his mood.

Infamous Blue is an extremely mysterious figure, veiled in near-absolute obscurity - almost like an eldritch monstrosity disguised as a normal human, his true nature is and will remain incomprihensible even if all of humanity put all their efforts into researching him for a thousand years. There are no records of his origin and the theories proposed from ancient times are only speculations based on the enviromental effects he's had on the world.

One esteemed professor, who had supposedly felt 'a brush of his horrid presence' in his dream, theorized based on all the emotions and strange visions he received from that miniscule contact. that the Nightmare Dragon was more ancient than the concept of life itself and that he was divided into many selves, but the genesis of his presence was not located anywhere, it either existed as part of the contiuum of spatio-temporal constructs or it completely exceeded them as a whole.

Two days after the professor's revelations, he was found perfectly still on his office's chair, with zero signs of any level of brain activity. The causes of such severe condition remain undiscovered as the professor's whole body seemed untouched and in practically perfect health. Some speculate the very same Nightmare Dragon he talked about had taken his life and soul as punishment.

The most interesting part of this whole event was that the professor, prior to having that peculiar and nerve-wrecking dream, had never once believed in things that may exist outside the confirmed boundaries of reality nor did he know a thing about Infamous Blue. Yet when he spoke about it, he sounded like someone who has spent most of their life researching the Nightmare Dragon.

Infamous Blue has no clear depiction and it is possible he cannot have one. The only known facts about him include a common set of traits and ticks observed by people who hound for clues regarding his existence.

Infamous Blue himself never shares any clear or reliable information regarding himself whenever he speaks to someone, though he has suggested there are beings similar to him.

Classification: Charismatic Trickster | Embodiment of the Nightmares and Unpleasant Feelings of sentient beings

Attack Potency: Unknown, at least Small Building level (Even a mere mortal manifestation could overpower several grown men in a brawl. Can effortlessly strange a human to death with one hand. Can break down a sturdy door without putting any effort.), possibly far higher (Due to all its abilities, an individual manifestation may or may not be fully capable of decimating the entire Earth, other planets or an entire universe with ease, though this has not been confirmed.) | Unknown, possibly Outverse level (Infamous Blue's true self has no clear description, though it is said to stand on 'the very genesis of existence' itself and is the embodiment of all unpleasant concepts in every possible timeline. People who have felt the ripples of the ripples of Infamous Blue's true power comment that he likely exists outside of the boundaries of any spatio-temporal or dimensional constructs and even a dimension by the value of infinity would not be able to contain him.)

Speed: Unknown, at least Superhuman (Is far swifter than the average human) | Irrelevant

Range: Unknown | Unknown, possibly Hyperversal (His influence is said to spread across every timeline and dimension)

Intelligence: At least Gifted, Infamous Blue seems to be extremely wise and knowledgable and has displayed effortless capability to understand and even moderate human science, technology, hypothesises, literature, theology, psychology, astrology, etc. Overall his intellect is on par with the greatest of minds in history. | Likely nigh-omniscient

Retrieved from "https://fcoc-vs-battles.fandom.com/wiki/Infamous_Blue?oldid=318475"
Community content is available under CC-BY-SA unless otherwise noted.