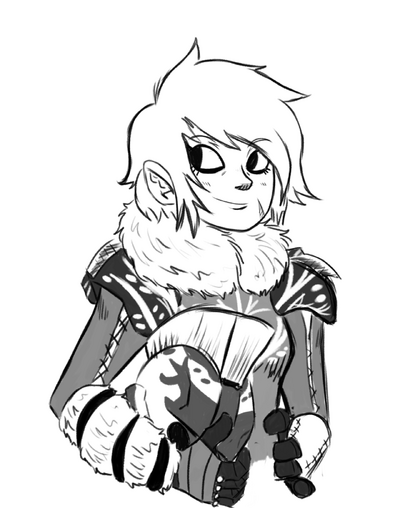 Ilia Nautil is a character in the Reincarnation Wars RP, who was first introduced during the Tournament for the Galaxy's Strongest. She's a lone drifter who fights evil and seeks to become stronger in order to defeat the Supreme Darkness. She has lost her memories of her current life and acts mostly on her experiences of her previous life because of that. Shortly after she was introduced she interacted with many of the characters and she was put into team Cosmic, together with Überwältigter Mond, Jackson, Russel and Genesis, for the tournament. Now she travels with the rest of the party.

Is almost always wearing armor that looks a lot like that of Saint-14 but smaller and customized to fit her and she also has a grey and white cape. She has light brown wavy hair at shoulder lenght and she looks like she's in her mid-twenties. Her eyes are yellow, just like her brother's, and her kind and energetic spirit shines brightly through them. She has a single golden earring and a red scouter. She has a slender, but strong body with fair skin. When her armor is demanifested she wears a tunic that looks like it comes from a fantasy world and loose grey training pants. Later on she replaced these with light blue jeans and a light grey sweater.

She's a kind person who holds anyone she considers a friend dearly, but she can be merciless when it comes to those who have upset her or have done harm to those undeserving of it. Although she has a serious demeanor and is a very reasonable person, she can be quite silly and akward at times. Since she lost her memories of her current life, she feels closely connected to her previous life in which she was the sister of Whyrrian Nautil and the princess of Equilibrium. Because of her previous life she feels very responsible for others and hates leaving people behind. When it turned out she could participate in the solo matches of the tournament she chose to stay with her team, even though she knew she stood a better chance of winning in the solo matches.

Although she's traumatised by her memories of the destruction of Equilibrium and losing everyone she loved, she stays strong and optimistic. Even though she has traveled alone for a long time she does like being with other people and she always has the backs of her companions.

Values: A peacful world where people can feel save and at home, friends

Speed: Massively FTL+ (Faster than the Future Warrior), Higher with various power-ups | Massively FTL+ (Far faster than before), Higher with various power-ups (When using all her speed boosts she was faster than 3.37 novemdecillion times the speed of light and with Thought Acceleration she can increase her thought processing capability up to ten million times, which allows her to react to things she normally wouldn't be able to perceive. She can also use her abilities to always be able to keep up with opponents that are faster than her but this is not always active)

Stamina: Extremely high (Can fight for centuries on end if needed) | Unlimited

Intelligence: Gifted. With the knowledge, skills and experience of her past lifes she has become incredibly skilled at battle. In one of her past lives she fought for centuries without pause, in another one she's one of the greatest sword fighters in the world etc. She is also an incredibly quick learner and she can quickly make decisions. She's also very intelligent outside of battle as one of her past lifes played a key role in ruling a large empire. Her ghost is an extraordinary genius with vast knowledge on the universe and its laws. The ghost is also extremely adapt at hacking and analysing. | Supergenius

Weaknesses: Destroying her Ghost takes away her ability to summon an recreate her equipment and it makes her less hard to kill. Due to a curse, Brahmastra cannot be used against those more skilled than her, though such individuals are very rare. To use Vasavi Shakti, she has to sacrifice her armor which weakens her in the process, however she can recreate her armor. | None notable

Note: Ilia Nautil has the knowledge, intelligence, skill and most of the powers and abilities of Saint-14 , Dino (Web Novel) , Lancer of Red (Karna), Future Warrior (Xenoverse 2), Zegion, The Warpriest, and Akka