FC/OC VS Battles Wiki
Register
Don't have an account?
Sign In
in: Characters, Male Characters, Fan Characters,
and 20 more

Henry Hill is the secret final antagonist of Paradise City, a Stand user and mob boss that controls the Chicago Outfit, along with numerous other powerful criminal organizations across the United States. Discovering the protagonists by sheer accident via one of his agents, the mob boss at first tries to recruit them before being attempting to dispose of them in fear of other powerful players acquiring the group for themselves, leading ultimately to their final encounter and his death.

Henry grew up in an abusive household. His father was a drunkard ex-businessman that had fallen under the poverty line due to mismanagement. When sober however, his father would demand and constantly force Henry to study, instilling in him an unshakable belief in knowledge being power, and having all that power concentrated on one's hands.

He first manifested his Stand while at home while being physically abused by his father going on another one of his drunken fits. The Stand killed the man in self-defense, breaking his spine. Henry then fled his home, aged 12, drifting from place to place, mostly working as a petty criminal to make ends meet.

However, despite his young age and relative naivety, Henry was possessing of the sheer grit and will to make it through the criminal underworld, along with the power of his Stand. Adopting numerous and various aliases, he eventually rose through the ranks to become the premier crime boss in America, however always remaining unseen and uncatchable due to his many proxies and sheer power, appearing as a simple small businessman in regular life.

In the 80s, he was made an intriguing offer by an old woman named Enya for an Arrow that could give others who were worthy the same power as him, for a hefty price. Knowing exactly to not trust outward appearance, Henry accepted and his organization saw the greatest rise in power ever with the sudden influx of Stand users.

Henry carries the air of a polite businessman around himself, and to most people he meets this mask is never removed. In truth however, this is just a ruse to cover up his more violent tendencies.

Though not exactly constantly violent himself, Henry is possessing of an extreme cold ruthlessness to him stemming from years of horrendous criminal activities. He also possesses little care about human life, not really considerate of his workers besides their use as tools.

While he rarely loses his cool, Henry is capable of holding immense grudges and usually retaliates tenfold against those who have wronged him. He has also shown and possessed signs of mild psychopathy since childhood.

The most distinctive feature of his personality, and perhaps the sole reason for him being the way he is as a person, is his extreme business-like sense of dealing with life. Everything is numbers on a chart to him, profits and margins on his notebooks, which leads to an incredibly bitter and callous individual who only desires to consolidate his own power.

Henry is a man of average build and height, usually seen dressed in a blue business suit and black shoes he maintains to immaculate levels. He has rough black hair, graying at the locks and a rather plain face. His eyes however, are a piercing green that are usually described as his most striking feature.

Likes: Mathematics, the arts (Is an accomplished painter and writer), bull markets

Powers and Abilities: Genius Intelligence, Extrasensory Perception (Capable of seeing Stands, along with other supernatural forces like ghosts and spirits, normally invisible), Aura and Summoning (Of his Stand), Never There has Superhuman Physical Characteristics, Non-Corporeal (Stands are the incorporeal manifestations of one's vital energy, and can only be harmed by other Stands), Non-Physical Interaction (Stands can interact with ghosts and other Stands), Invisibility (Stands can only be seen by other Stands and Stand Users), Selective Intangibility, Size Manipulation, Time Manipulation (Anything within it's area of effect is slowed down in time), Causality Manipulation (When under the effects of it's ability, actions are arbitrarily "stretched" to accommodate the extra time it imposes onto them)

Attack Potency: Athlete level, likely Building level with Never There (The Stand never clashed directly with any other Stand, and was judged as significantly weaker than a pure close-combat Stand such as Shoot to Thrill. However, the Stand easily broke through a man-sized chunk from a boulder, tunneled through the roof of an apartment complex and critically injured Michael Prince after a barrage of punches)

Stamina: Unknown. Never required to show much in his own battle, but presumably considerable.

Intelligence: Genius (Was naturally gifted and extremely proficient in mathematics and economics from a very young age, having the intelligence to make it into the top colleges of the city easily if his poverty hadn't stopped it. Is the ruler of a massive criminal organization unprecedented in scope through the United States, and constantly kept it safe from informants, snitches and government meddling, all while remaining entirely invisible and several steps ahead of his enemies)

Weaknesses: Any damage dealt to Never There is reflected onto him. It's ability only works within range. Anything that runs out it's timer while in his area of effect cannot be affected again until it leaves and re-enters it. 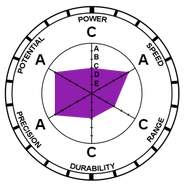