Heather Leviathan was born from the famous Leviathan family. Like most of the mages in it, she is a grandmaster. Growing up, she was taught about magic and life cards very early. Training to hone her skills so that she could increase the strength of the family name. Heather had a unique type of earth magic, she utilizes sand with her life cards. Her mother, Dahlia, felt her abilities were very useful, and she was the only child of hers that she allowed to help her with her shady tasks. Dahlia funded the Eutopia school which was a magic school as a cover up. Heather joined this school, and took on the role of a teacher at this school. Secretly, she and the rest of the staff, worked on experimentations. Heather, Alice, and Reizer, managed to capture and defeat an elemental titan. Which is against council orders as all elemental beasts are to be killed. Eutopia worked on ways to drain the beasts power, so that they can create other elemental beasts as well as give mages their abilities.

Heather is one of the main antagonists of the series.

Heather is extremely cold due to the personas her mother enchanted onto her. Dahlia taught her that life itself is a game, and that every person should be striving to win. Heather adopted this way of thinking, and finds ways to "hack" the game. Heather has killed plenty of people without any sign of remorse. However she does care about her mother, even though Dahlia see's Heather as a tool. She is loyal to her mother, willing to do whatever she asks, regardless of the severity. However this is how Heather believes this is the only way to win the game. As Dahlia had all the answers and was by far the most intelligent being in the world. Going against her meant losing the game. When both of them felt like they did all they could, they said "Game Over". Implying their journey was complete.

Heather can be quite flirtatious. She has flirted with all of the attractive male grandmasters, even to the point of joking to have kids with them to continue the Leviathan line. Her husband is Yuki Thorn, despite this, she still flirts with other guys. Writing it off as a joke even though she is dead serious.

Heather can also be quite arrogant, which lead to her being defeated by Orion, as well as Bela.

Attack Potency: Large Country level (Was able to give Orion a good fight but was defeated convincingly by him and Bela solo. Can cover an entire country in a potent sandstorm)

Sand Tsunami: Heather can form a large tsunami of sand behind her, or behind her opponent. The wave crashes down with insane force and crushes them. This can also dehydrate users and decrease their strength, magical power and stamina.

Great Sand Pyramid: Heather does a hand gesture, and a large sand pyramid forms out of the ground. This can be used to defend against powerful attacks.

Quicksand: Heather snaps her fingers and forms sinking sand around the feet of the user. Depleting their magical power, energy, and stamina. Upon sinking fully, they are killed.

Sand Blades: Heather forms dozens of sand like long swords around her. She fires them and they impale the target while simultaneously weakening em for as long as the sand remains in them.

Disassembly: Heather can turn her body to sand, and evade attacks. She can reform herself from any single grain of sand wholly.

Four Pointed Sand Tsunami: Heather raises her right hand in the air, and she forms large sand tsunami's around the target on all sides. They reach up kilometers in the sky, and they all crash down on the target, crushing them completely.

Sand Shark: Heather puts her forearms together and turns them sideways, she then fires a large shark made out of sand. The shark then devours whatever it is sent after, or it collides with the target for impact damage. If inside the shark, they are disolved by the sand in the place of stomach acid.

Sandstorm: She summons a country wide sandstorm. In this state, she teleport from any grain of sand making her seem omnipresent within it. The sand obscures their vision, as well as makes it hard for them to move by making their body heavy.

Sand Twister: She does a hand gesture, and a sand twister forms around the target. Sucking them in, and the force rips them to shreds.

Sand Kingdom: She puts her hands in a prayer position, and forms a large kingdom of sand around her. This defense is ultimate, and blocks attacks from all angles.

Sand Meteor: She can form large meteors made of sand and make them crash down on any enemy. Upon contact, they are either crushed, or have their energy depleted.

Sand bullets: With her fingers, she can act as if she is shooting a gun and fire bullets of sand at a target. These sand bullets can riddle down any barrier with enough shots.

Sand Crusher: She uses the sand from the battlefield and uses it to constrict the user and crush their internal organs.

Sand Destruction: She pours sand into an opponents wound, nostrils, or mouth. She the can kill them in a variety of ways such as; having the sand shoot out of their organs, dehyrdrating them, and blowing them up from within.

Sand Whirlpool: She forms a whirlpool around herself and the opponent at close range. This sand weakens them considerably as well as makes her move much quicker.

Sand Shower: She throws a ball of sand in the sky, sand rain droplets rain down and dehydrate whatever they touch. Causing quick death.

Sand God Wings: She can form wings of sand and take flight. Grains of sand are sent out of the wings gradually, so she could use that same sand to use later.

Sand Balls: She forms dozens of balls of sand around her. They spiral around her, and whatevr it makes contact with, withers and die. She can also send them flying.

Shredding Sand: Heather sends a large amount of sand at the target capable of shredding them to pieces on contact.

Sand Chains: Heather forms a sand chain in her hands or around her ankles. She attaches it to a target and it drains their power and energy. 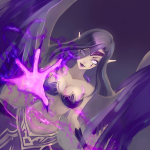