FC/OC VS Battles Wiki
Register
Don't have an account?
Sign In
Advertisement
in: Tier 2, Tier 2-A, Tier 0,
and 10 more 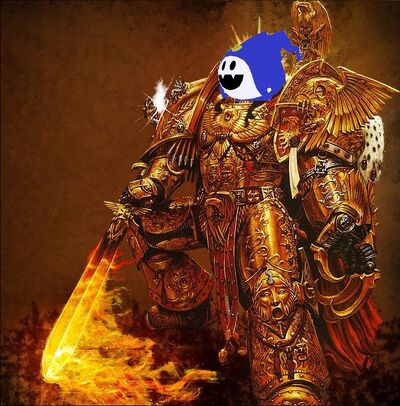 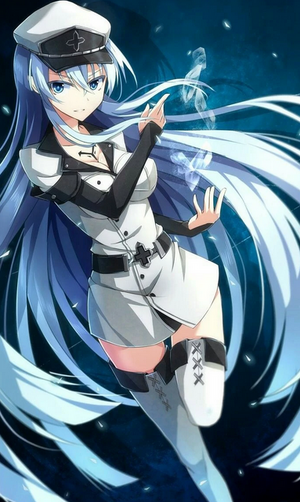 God Emperor Frost is one the Player Characters of Complete and Absolute Chaos. Having once been a normal Jack Frost, he was empowered by Frederick to watch over the multiverse before the latter sacrificed himself for the sake of Humanity.

Now having the mantle of the defender of the multiverse, GEoD Frost fought against the dark-empowered players and then fighting off the invasion of The Dragon alongside the other summoned, clashing against it untill Samael showed up. Their powers being useless open this divine being, as he himself was the one that gave them out, Frost attempted a last ditch attack by combining the powers of everybody into his Longineous Testament, an ultimate attackk to defeat the ultimate fiend, which seemingly worked ... only for it to be revealed to have destroyed the fallen angel's physical body, with it's true body not having been affected. The situation seemed hopeless once again, but then from his Longineous Testament a light came out, the light of the Holy Grail, which Frost menaged to connect with, thought not fully initially. Now holding the power of an Higher-Order Artifact, he and Azrael, who had became an Higher-Order being by accessing his true form's powers, fought in an epic struggle against Samael, the stakes of cration being at stake, but then the fiend's Holy Cross and the hand holding it got stole by The Crow, it being the only thing preventing the God Emperor from absorbing his powers. Thus the battle was over as a powerless Samael got struck down by Azrael.

Afterward, he continued his role as guardian of creation, furthermore he has recently changed into a human form and started dating Akene.

Power Absorption and Reality Warping (It absorbs others powers which it allows its user to utilise themselves. A previously absorbed power allows the user to grant wishes through Miracles warping Creation to realise the wish), Can manipulate the Akashic Records

Attack Potency: Multiversal+ level (Via WoG), Boundless with the Holy Grail (Fully absorbed Samael (Crossings)'s powers and can be used to manipulate the Akashic Records.)

Speed: FTL, Irrelevant via amps and the Holy Grail

Weaknesses: May lose his invulnerability if he lost control of all of his factors. Were his factors to be used against him, they could allow one to fight him normally.

Demon Skills: Has access to all non-demon exclusive skills in Devil Survivor 2

Melt Virus: Also known as All Drain, is Meltlilith's unique id_es skill, having evolved from the Absorption skill. She first injects her target with a special "honey" secreted by her body, fusing parameters such as experience, skills, and capacity before melting down the target into something she can absorb and make a part of herself, regardless of whether or not it is organic or inorganic. However, she has greater difficulty absorbing the spiritual nature and skills of her foes, converting them into nutrients to use instead. Her constant absorption of her victims made her incredibly powerful to the point that she was considered "Level 999" and impossible for Hakuno's Servant to defeat until she was crippled by BB's and Shinji's meddling.

Manipulation of Game Rules: As an AI and an Alter Ego approaching BB's level, Meltlilith is able to affect the Laws of the World through her authority in the Moon Cell. She primarily uses this to swap out physical and magical laws for those she prefers, overwriting the "lack of sense of time" on the Far Side of the Moon with "the lack of hit detection for Meltlilith", rendering her functionally invincible for as long as the law remains in place as reality perceives her as "not being struck" by any attack.

Overwrite: All Digimon can rewrite their data, so that they are able to react to various situations that were once problematic for it. This usually causes a gigantic increase in power, durability, speed and sometimes new skills and resistances to be gained. However, the more emotional the Digimon is, the more violent the overwrite becomes and thus can lead to negative effects.

Longinuslanze Testament: (Covenant - The Holy Spear of Destiny) Reinhard’s Holy Relic, also named and known as the Spear of Destiny, a weapon only he himself can wield due to being the most charismatic being in the world, representing the form of his Valhalla. The weapon is described as being “Fast like Albedo, never missing like Rubedo, and all-killing like Nigredo”, meaning that the spear is always faster than its target, never misses, and kills whatever it hits on a physical, mental, spiritual and conceptual level before dragging their soul to Valhalla to become part of Reinhard's legion whenever Reinhard throws the spear at his foe. Reinhard can also instantly curse the target with a Stigma with the Longinus should he choose to at anytime, making them a part of his Legion the moment they die. Additionally, the spear can also ignore the concept of distance, as Rindou Koga (his Holy Relic's successor in Kajiri Kamui Kagura) was able to do this through her use of it against the Tenma's and Valeria was able to use this to get close to Wolfgang and attack him in surprise while the latter had his True Briah active; this aspect allows Reinhard to have the spear fired at his enemies in an instant without having to cross any distance at all. Aside from Reinhard himself, those who look upon the Lance itself will have their minds burned and their souls erased. Members of the Legion, beings who possess resistance to soul attacks and destruction and have all been able to operate while under the presence of Methuselah during the events of "Interview with Kaziklu Bey", find it troubling to maintain their consciousness when in its presence, and attempting to lay hands on it will also erode their existence the longer they hold onto it - even Ren Fuji, who has the unique capacity to wield any other Holy Relic in the series such as Beatrice's, was having his body and soul destroyed when he attempted to use it against Reinhard during the events of Kei's route.

The four factors that make up Canopus: Heat, Time, Space, and Gravity. These four factors are what everything in the multiverse is derived from. Hence, by encompassing these four things, Canopus encompasses the totality of the multiverse. This gives Canopus “infinite defenses”, as just as fire cannot burn fire and water cannot douse water, all things will fail to harm him in any manner, as it is the equivalent of fighting all things. Canopus can attack with all things, allowing his attacks to always defeat the foe, in a similar manner to water dousing fire, but on a far superior level involving the use of everything.

All powers and resistances in the Roleplay are equalized to a 2-A level regardless of what they were originally, with the exception of standard abilities, which are 5-D in scale:

Additionally, the layers of the abilities remain.