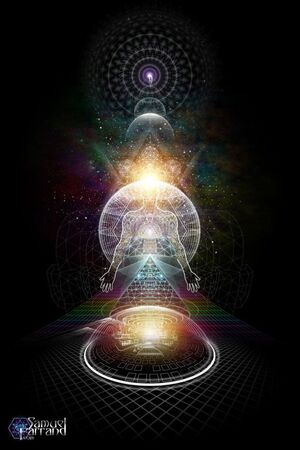 GVRL (short for Gaveriel) is the creator of the Sogontosverse Multiverse. he is the leader of the 0 Trinity and far above them by a infinite hierarchy of spatial dimensions.

Despite sounding and sometimes appearing as a male, his gender is irrelevant, the same thing would go for its age.

According to the Guardians,HIM (also GVRL) created "everything in a instant" and created his Son,Mayuraquel. which then created the infinite multiverse. and then formed the 0 trinity, which consists of two halves of him, Maraus and Quelyura.

Attack Potency: High Outerverse Level (GVRL Avatars are at least superior to the likes of Lohujah,who created infinite dimensions with different layers. superior to the Angel Guardian Trio Ultimate forms, who are equal to Yaldabaoth avatars who transcended all realms incluiding the likes of the Mastara realm, a place which include within it's body mini realms with infinite spatial dimensions which number are Infinite) Boundless (Is the supreme being of the Sogontosverse, infinitely above the true forms of the 0 trinity. Created infinite spatial dimensions with thousands of layers and hierarchy of worlds. Godly above Yuhgr, as he sees him as mere fiction. Said guy can destroy "infinite numbers of layers,each one with thousands,thousands and thousands of spatial dimensions" according to the Guardians)

Durability: High Outerverse Level | Boundless (All of creation cannot affect him. thus, he can't be damaged)

Intelligence: Omniscient (he knows everything according to the guardians)

Retrieved from "https://fcoc-vs-battles.fandom.com/wiki/GVRL?oldid=321663"
Community content is available under CC-BY-SA unless otherwise noted.