Flandre Scarlet is a secondary protagonist / antagonist of the Castlevania-inspired Touhou Fangames, Koumajou Densetsu (紅魔城伝説; Legend of the Scarlet Devil Castle). She is the younger - yet more powerful - sister of Remilia Scarlet, Lady of the Scarlet Devil Mansion / Castle. She was kept locked away in the mansion's basement for 495 years, and the isolation of the experience drew her to madness (Or perhaps, her insanity was the reason she was locked away). Despite her violent and psychotic nature, Flandre is still a little child at heart, and all she wishes to do is to have fun with her friends and playmates, much to the horror of Hong Meiling who is assigned the role of her caretaker.

Name: Flandre Scarlet, The Sister of the Devil, "Imouto-Sama"

Powers and Abilities: Superhuman Physical Characteristics, Immortality (Types 1 and 3), Magic, Flight, Regeneration (Low-High; can regenerate from just her head), Transformation (Can transform into a swarm of bats or a cloud of mist), Duplication, Danmaku, Fire Manipulation, Blood Manipulation, can destroy virtually anything by crushing its "eye",

Attack Potency: Large Star level (Stronger than her Older Sister. Matched Reimu and Marisa with ease. Greatly wounded Ran Yakumo with a casual attack, though Ran was at least somewhat tired from her fight with Sakuya, Patchouli and Meiling), can bypass durability by crushing her target's "eye".

Lifting Strength: At least Class 25 (Vampires are said to be able to uproot thousand-year old trees)

Durability: Large Star level (Can shrug off attacks from Reimu and Marisa)

Range: Hundreds of Meters with Danmaku

Intelligence: Low. Flandre has the mentality of a young child, coupled with the insanity brought by centuries of isolation in the Scarlet Devil Mansion's basement. She is brash, impulsive, whiny, and notably sadistic / psychotic without being aware of it 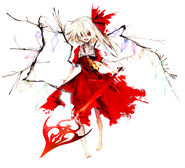