FC/OC VS Battles Wiki
Register
Don't have an account?
Sign In
Advertisement
in: Characters, Male Characters, Roleplay Characters,
and 57 more 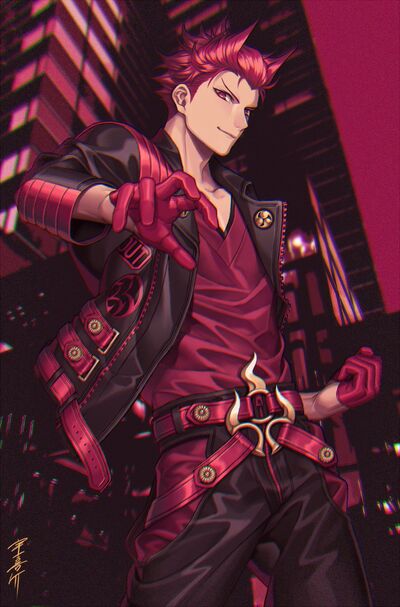 Fatalis is one of the characters in the 3rd timeline of EWTRTW. Fatalis, despite his quite weird name, is mostly an ordinary person, with down to earth personality and likings, which includes strawberries, games and generally chilling.

Fatalis hates boredom more than anything. While again, he likes to chill, he sometimes really want to show his powers to look cool. He is also really clumsy at times, resulting in violent fragmentation of entirety of Arizona, removing it from the map of the world and killing hundreds of thousands of people. Surprisingly, he's kinda okay with it for the most part. He is also friendly to other people as he didn't immediately attacked Coolguy after he destroyed his left arm.

Same as before plus Stealth Mastery, Vehicular Mastery, Martial Arts, Weapon Mastery, Explosion Manipulation via grenades, Light Manipulation via stun grenades, Fire Manipulation via white phosphorus grenades, Smoke Manipulation via smoke grenades, Invisibility via stealth camouflage, Electricity Manipulation (Can fire bolts of lightning and imbue his fists and HF blade with electricity), Absorption (Can absorb the electrolytes of other cyborgs to replenish his own energy), Aura, Statistics Amplification and Multiple Personalities (Via Blade Mode and Ripper Mode), Durability Negation (HF blades weaken molecular bonds to cut cleanly through virtually any target), Resistance to Heat, Cold and Poison (The Skull Suit provides insulation from the environment and protection against toxins)

Stamina: Extremely High. Can casually stroll around and make smart remarks with a buster sword-sized blade shoved through his chest and being gutted by multiple scythes didn't impede his performance in the slightest. Thanks to his cybernetic body, he can fight in spite of grave wounds that would prove lethal to anyone else, capable of fighting despite multiple stab wounds to vital parts of his body.

Intelligence: Gifted. Though he is clumsy, he is very skilled at killing, hunting and assassinating, putting even the best soliders of US to shame. He is also expert at infiltration, camouflage, swordsmanship, marksmanship, etc. He is an extremely quick to learn, able to master a weapon for very short period of time.