Extinction is a primordial creature and the main antagonist of the "End of the World RP." He is a force of destruction bent on absorbing the multiverse and becoming the sole being in existence.

When disguised, it usually takes the form of a man in the type of wear you'd usually see at in a funeral, all black with a tie and long pants. It has black hair and dull gray eyes.

It's true form however is vastly different, it takes the form of an all black eldritch horror with tentacles protruding out of it's "head", its hands are detached from it's body and are flying around the air. It has a giant smiling mouth and two large eyes.

Is a cosmic being bent on the sole purpose of absorbing the multiverse, it has managed to manipulate all of his followers and will absorb them without a second thought when they are no longer of use to them, as shown when he absorbed Bill Cipher and Galeem.

In-battle he likes to use the powers he has absorbed, and if he gains a new power he will use it along with his other powers, but he generally doesn't have a fighting style when in-battle.

Origin: End of the World RP

Attack Potency: Low Multiverse level (A threat to the entire multiverse and threatens to absorb it whole, which has dozens of universes. Claims to not need to destroy the center of the multiverse in order to destroy it all)

Speed: FTL+ (Superior to Aidan when amped by the Multiverse)

Stamina: Very high, capable of fighting against Aidan's army for a long period of time

Intelligence: Genius, can manipulate his followers to do his bidding on whims and trick them into believing him within short periods of time.

Weaknesses: Destroying his eyes will stun him for a short period of time until he regenerates 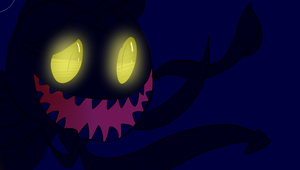 Credit to ShatteredNightMares for drawing this!
Add a photo to this gallery