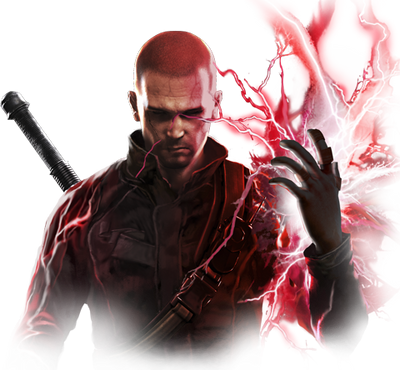 Powers and Abilities: Superhuman Physical Characteristics, Lightning Manipulation, Expert Acrobat, Skilled in Hand-to-Hand Combat, Regeneration (Low-Mid. Should scale to Forced Conduits, who can regrow limbs. Can regenerate gunshots from automatic turrets, shotguns, and magnums), Immortality (Type 3), Resurrection (The electricity in his body will restart his vitals even after being dead for 5-6 minutes), Longevity (Kessler, his future self, was able to live for over a hundred years, some Conduits have claimed to have lived from the Salem Witch Trials until present day), Electricity and Radar Sense (Via Radar Pulse), Extrasensory Perception (can sense electricity, hostile intent and telekinetic constructs, etc with his Radar), Stealth Mastery, Limited Precognition (Gets visions of himself in the future using new powers after overcharging himself, giving him instant knowledge on how to use them, can sense hostile intent within others, allowing him to differentiate friend from foe, and discern when someone is about to attack him), Accelerated Development (Training, Battle; Physical Stats, Abilities), Limited Reactive Evolution (By stressing his body by using his powers in different ways, he can either gain new abilities or improve upon his current ones, there is also the possibility that his body will develop new powers to best aid the situation in moments of extreme distress similar to Abigail Walker), Rage Power (All Conduits get stronger with rage), Bioelectricity and Life Energy Absorption via Bio Leech (Drains an opponent of their bio-electric and life energy, shutting down their body), Magnetism Manipulation, Weather Manipulation, (Can rain lightning bolts from the sky, and create storms), Gliding, Weapon Creation (via Gigawatt Blades), Healing, Limited Telepathy (Can view the memories of the recently deceased by draining their neuroelectrical energy), Forcefield Creation, Kinetic Energy Manipulation (Wraps explosive kinetic charges into his rockets and grenades. Can release shockwaves from his hands), Homing Attack (via Tesla Missile, Stalker Grenade, and Sticky Rocket), Attack Reflection (Can reflect projectiles, debris, and energy attacks with Shockwaves and Blasts), Status Effect Inducement (Can paralyze people and induce heart attacks with his lightning), Electrical Aura, Statistics Amplification (Can become Overcharged, or get stronger by draining electricity, Precision Mode allows him to slow his perception of time to the point that opponents comparable to him appear to come to a crawl, as well as deal much more damage), Telescopic Vision (Precision Mode lets him "zoom in" on targets), Awakened Power (via Karmic Overload), Durability Negation (via Bio-Leech), Skilled user of the Amp, Damage Boost (can inflict triple damage with Finisher attacks as long as he lands a couple of hits with the Amp. Ultra attacks deal even more damage, but require more hits to be landed), Telekinesis (via Kinetic Pulse), Enhanced Kinetic Energy Manipulation (Can harness kinetic energy to increase his jumping ability [Detonation Blast]. Can infuse objects thrown with Kinetic Pulse with kinetic energy, causing them to generate large explosions on impact), Limited Matter Manipulation (Can absorb and manipulate Ionic Charges, ions composed of Ray Field energy, to amplify his abilities), Enhanced Weather Manipulation (Can create tornadoes), X-Ray Vision and Bio-Scanning (via Enhanced Radar Pulse), Napalm (Fire and Oil) Manipulation, Smoke Manipulation, Summoning (Can summon Spikers to fight by his side), Explosion Manipulation (Headshots with Skull Bolt cause targets to become engulfed in an electrical explosion), Status Effect Inducement (Nightmare Blast traps its target in a cloud of smoke, ash and lightning, paralyzing and suffocating them), Limited Flight (via Firebird Strike), Durability Negation (via Ionic Drain and Skull Bolt), Resistance to the following: Electricity (Completely unharmed by electrocution and lightning strikes. Kessler's lightning only stuns him momentarily), Extreme Heat (Can easily shrug off the intense heat from lightning strikes. Can resist The Beast's grasp, who is made of fire and lava. Can shrug off fire and napalm attacks from Nix), Ice (Can resist sub-zero attacks from Kuo and the Vermaak 88), Matter Manipulation (On a Macro-Quantum level. Resisted The Beast's matter manipulation), Absorption (Of matter and energy. Tanked Kessler's Bio-Leech with no loss of electricity or life energy and was only briefly stunned. Withstood David Warner's grasp, which can do the same with a mere touch, with no issue. Resisted The Beast's macro-quantic matter absorption), Transmutation (Resisted The Beast's transmutation), Poison and Acid (Resisted poisonous and acidic attacks from Bertrand and The Corrupted), Mind Manipulation (Can resist Sasha's mind control tar in her prime, who could easily control all of Empire City [which has a population of 10.5 Million people] while in a vastly weakened state due to being tortured and drained by the First Sons), Madness Manipulation (Type 1. Wasn't driven mad by Sasha's tar when turned into gas, which when sprayed over Empire City's citizen, sent them into a murderous frenzy), and Disease Manipulation/Biological Manipulation (All Conduits are immune to the Ray Field Plague, a highly deadly disease that the CDC was completely unable to deal with), possibly Acausality (Type 1) (Kessler, his future self, was completely unaffected by changes in the timeline. And had no quarrel with killing Cole in their battle, implying he would've been unaffected by the death of his past self. However, since the mechanics of time travel in InFAMOUS are never elaborated on, we don't know if this is simply due to Multiverse theory or not.)

Lifting Strength: At least Class G (The Beast can grow as tall as skyscrapers and was able to casually throw vehicles and a giant statue with little effort), higher with Magnetism/Kinetic Pulse

Stamina: Limitless (Can fight for extended periods of time even after going a few days with no food or sleep, never even showing a hint of exhaustion. Can fight with no problems even after suffering sever injuries)

Standard Equipment: A cellphone and the Amp (a melee weapon that channels Cole's melee power into his strikes), makeshift stake (as a vampire), the Barbed Cross

Intelligence: Genius. Highly adaptable and strategic combatant, able to easily exploit the slightest weaknesses in the heat of combat. Comes up with complex plans and strategies on the fly, and is an expert at using his environment to his advantage. Constantly outsmarts and outmanuvers highly trained military troops, war-trained mercenaries, secret organizations hundreds of years more trained and advanced than the rest of the world's militaries, and even his own future self. Is able to logically deduce the outcomes of his actions during Karmic Decisions. Due to receiving his implanted memories, he should possess Kessler's several centuries of knowledge and experience.

If the player chooses the "evil karma" side in inFAMOUS 2, then Cole will have the ability manipulate napalm; the ability that he got from attempting to transfer powers with Nix.

In the inFamous 2 evil ending, John White decides to transfer his powers over to Cole so that he could carry on his mission.

During the events of the DLC side story "Festival of Blood," Cole is bitten and subsequently turned into a vampire by the head vampire herself, Bloody Mary. As a vampire, Cole gains several new supernatural abilities that further boost his already superhuman skill set.