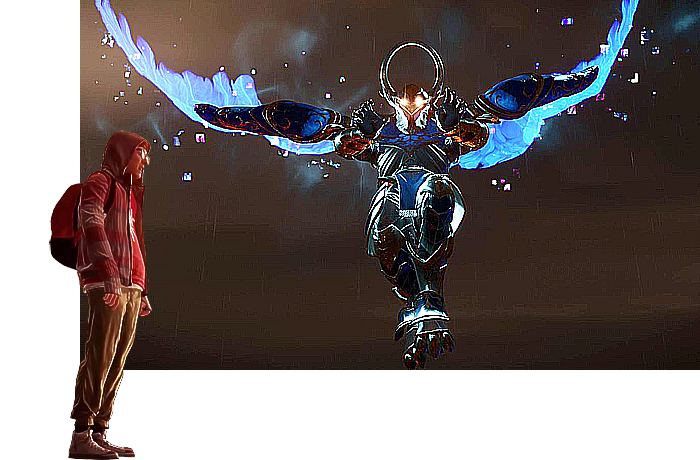 Eugene Sims is a Conduit with the power of Video Manipulation. He was the son of a US Congresswoman and a police officer from Delaware.

As a child, he was a scrawny nerd who was constantly bullied, the only solace he found was in the online MMO, Heaven's Hellfire. Often ignored by his mother in favor of her work, the only figure Eugene had to look up to was his father. After his father was transferred to Empire City mere days before The Blast, and presumed dead, Eugene only continued to cower and shield himself from the world, and continued to be a constant victim of bullying and his mother's indifference.

Until one day, he was pushed too far, and his Conduit powers activated, injuring the bullies and drawing the attention of the DUP. Whose leader, Brooke Augustine, arrived to personally arrest him.

After seven years, Eugene escaped while on a prison transfer. He was later found by Delsin Rowe, who taught him how to stand up for others and be courageous, and helped him in his battle to overthrow Brooke Augustine and her Department of Unified Protection.

Tier: At least High 6-A. Higher with Rage Power

Powers and Abilities: Superhuman Physical Characteristics, Skilled Hand to Hand Combatant, Enhanced Senses, Aura, Rage Power (Gains power when fueled with Rage. His power grew so strong when he was angered he lost control of them), Healing, Statistics Amplification, Regeneration (Mid-Low, Low-Mid via absorbing energy), Longevity, Immortality (Type 3), Video Manipulation, Fire Manipulation, Light Manipulation, Technology Manipulation, Intangibility (Can turn into pure video particles), Telekinesis (Telekinetically moved the platforms in his pocket dimension), Invisibility, Teleportation (Can teleport between his pocket dimension and reality with ease, and instantly teleported to where Delsin was), Forcefield Creation (His angels can cast forcefields onto him that can easily shrug off attacks from Delsin), Duplication (Can create hard light clones of himself. Separated into dozens of smaller angels during his fight with Delsin), Transformation and Shapeshifting (Into his angel form), Summoning (Can summon endless legions of video angels and demons to fight for him), Flight, Pocket Reality Manipulation (Can create pocket realities large enough to contain large castles and vast mountain ranges, and is capable of warping reality inside them), Limited Reality Warping (Inside a pocket dimension), BFR and Sealing (Can banish enemies to his pocket realities, where they cannot normally escape unless he allows them to), Matter Manipulation (Macro Quantum. Can destroy enemies on a macro-quantum level leaving them as nothing but subatomic particles. Is able to turn matter into energy and absorb it, or turn it into another type of matter or energy such as fire and light. Can create objects such as swords out of thin air. Can be used passively in combat with casual attacks), Transmutation (Can turn matter into energy and absorb it, or turn it into another type of matter or energy), Afterimage Creation (Can leave after-images of himself behind to confuse opponents), Homing Attack (With Bloodthirsty Blades), Portal Creation (Can create portals to his pocket dimensions, most notably through televisions), Durability Negation, Attack Reflection, Limited Reactive Adaptation (Conduits gain new powers and abilities by stressing their powers in different ways. In moments of extreme duress, their bodies will develop new powers to best aid the situation), Accelerated Development (Conduits are naturally able to hone their abilities through training for short amounts of time), Large Size (Types 0 to 2), Resistance to Disease Manipulation/Biological Manipulation, Matter Manipulation/Transmutation (Delsin's matter-altering abilities had no effect on him), Mind Manipulation (At least Planetary Scale. Cannot be mind-controlled by Fetch's weakpoint technique), Time Manipulation (Stasis fields used by Delsin will not freeze him in time), Reality Warping, Soul Manipulation and Willpower Manipulation

Attack Potency: At least Multi-Continent level (Comparable to Post-RFI Empowerment Cole and other Omega-level Conduits. Can create and manipulate pocket dimensions the size of continents, Created a miniature sun). Higher with Rage Power

Speed: At least FTL, likely higher (Faster than before. Comparable to Post-RFI Cole)

Standard Equipment: A cell phone and a laptop to utilize his video powers. Several hard-light angel swords for combat.

Intelligence: Supergenius. Had a high-college level intellect even in his early teens. Can easily hack into the DUP and highly-classified government databases. Created a homemade phone app that can track encrypted military communication signals. Set up a secret lair that was completely invisible to the outside world. Can create vast, complex, and highly-detailed pocket realities. Stated that his Matter Manipulation and creation of constructs requires being able to memorize and construct the subatomic structure of the object he wishes to create. Is likely skilled in strategy as a gamer, and likely received training in Curdun Cay. Took quickly to understanding the First Sons technology and systems, being able to hack them in seconds.

Weaknesses: Extremely anti-social and shy. He would often send his angels and demons on missions so that he wouldn't have to go in public. After meeting Delsin, he has started to fight on his own, relying less on his minions, though as a result, he has less direct combat experience than his fellow Champions.

Retrieved from "https://fcoc-vs-battles.fandom.com/wiki/Eugene_Sims_(InFAMOUS_Extended_Universe)?oldid=245717"
Community content is available under CC-BY-SA unless otherwise noted.