FC/OC VS Battles Wiki
Register
Don't have an account?
Sign In
in: Incomplete Profiles, Ovenverse, Tier 4,
and 2 more

A character made by Sir Ovens. Part of the extended universe within the Ovenverse

Elphetite is the Eternal of Justice and 'Mother' of all the Valkyries. She had always been in a constant war with Luxzes, Xanus, and Pralaxus, keeping Regular Space safe from their influence.

Name: Elphetite, The All Valkyrie, Mother of All

Age: Ageless, can take the form of any age

Attack Potency: At least Multi-Solar System level (Avatars of Elphetite are capable of facing Hunter Freemont and Zaniel in combat) | Hyperverse level (Exists in Eternal Space, which was stated to contain 'countless dimensions' stacking atop each other. In her battle with Luxzes, they destroyed an 'endless array of dimensional clusters' which was described as merely a fraction of Eternal Space.)

Intelligence: Varies | Extremely high. Elphetite is capable of seeing through the eyes of all her Valkyries and understanding all their thoughts.

Weaknesses: Elphetite exists due to the concept of 'justice'. Should this concept be erased, none of them would exist.

Elphetite's Avatars are just names of bands spelt backwards. Go ahead, try it. 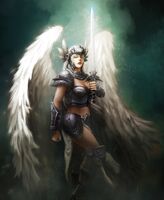