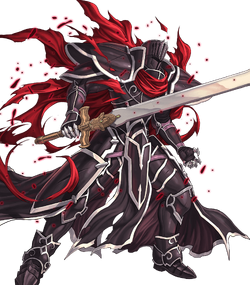 (Note: I do not own the image in this profile. All credits should go to its respective creator.)

A character made by FateAlbane, and part of the narrative in the Castle Chaos RP.

A powerful knight employed by the Isfetiamat, he wields a gigantic hammer with an even more gargantuan strength. This behemoth of a man seemingly follows the forces of Castle Chaos, or could well be directly aligned with whosoever is behind them all.

Dragnar was one of the only survivors among the experiments made by the Ur-Shanabi, in which they attempted to transfer unique abilities into different children. While most turned into abominations, Dragnar was a success, and alongside Crescentia C. Alhazred, managed to escape, killing all those who suffered under the experiments.

Though, even in escape, Dragnar was doomed to die, his own power being the direct cause of his demise. In the time before he died, he met Alhazred several times, eventually growing close to her, and before he died, he asked for a contract; something that allowed him to truly die as he lived, fighting, even if as an undead monster.

And his wish was eventually granted, as the party that stormed castle chaos was finally able to bring his end, though under immense struggle against the sheer will and might of the Chaos Knight...

Dragnar has only ever known fighting. His character is that of the blood knight, a rampaging monster of battle who fights for only that, fighting, respecting those who can grant such desires and immediately disposing of those too weak to stand against him. This is shown full force when his full power is unleashed by someone destroying his armor, something he had to contain his overwhelming power and manage to have whatever fights he could manage.

Though, he eventually found purpose in beyond just combat, learning that even someone like him could protect something, and have love.

Superhuman Physical Characteristics, can skillfully wield his hammer in combat, Use of Energeia grants him Energy Manipulation, Aether Manipulation (Energeia was stated to be an ethereal substance - and also what powers mortals, nature and every aspect of the world), Extrasensory Perception (of the enhanced sight, life detection and power reading variations), Reactive Evolution (Those who possess Energeia can grow acclimated to and develop resistance to adverse effects on their being), as the defensive capacity of Energeia is directly proportional to its offensive means, Dragnar is resistant to powers he has displayed.

Non-Physical Interaction (Enchanted weapons like his armor and hammer can affect or damage otherwise intangible beings and substances), Summoning (can call forth a sinister horse from his own shadow - which Dragnar can ride in order to disappear in shadows), Earth Manipulation and Petrification, Aura (At his full power, Dragnar's mere radiated aura petrifies all that stands before him, even going to the extent of the mind, soul, concepts and sorcery), Immortality (Types 2, 7 and 8 [As an undead maintained by Alhazred's necromancy, Dragnar is nigh invunerable, with wounds doing practically nothing to him until he was destroyed on a quantum level by sister gwen. Even his dream self being destroyed, which should entirely erase him from existence, ultimately only weakened him, and he continued fighting])

Resistance to Elemental Manipulation of various kinds, and several other powers as listed here.

Attack Potency: Large Mountain level (Fought on par with Wu of The Cat's Eye and Rickert at the beginning of the story) | Country level (Was able to fight on par with Crescentia C. Alhazred in the past, though he was easily defeated by her Unique Art. By merely having his armor taken off and his Energia released, generated an Earthquake so severe it would have turned the nearby city into dust if not for Energia reinforcement by Saya, Siren and the Aetherys around it. Just him standing there is stated to have more power then even Gal's Resonance against Svectral)

Speed: Relativistic (Though relatively slower than him when he's amped, Dragnar is for all intents and purposes, on the exact same level as Wu when it comes to their speed in combat. Would be a threat in combat to the likes of Serpens.) | Relativistic+ (Far faster then before, comparable to the Warrior of Ash, who was compared to Gal's light sorcery)

Durability: Large Mountain level (Withstood many blows from Wu of the Cat's Eye in their first encounter, though it easily broke when they clashed for the second time) | Country level (Someone's level of Energeia scales to their defensive capacity, making the person's body as resilient to damage as the destruction their powers can bring.)

Range: Several meters by increasing the size of his hammer and several of his attacks. Kilometers with his Earth manipulation (caused a magnitude 4 Earthquake in the city of Lemniscrest merely by walking) | Same as before, but to greater extent with Earth Manipulation

Stamina: While not quite on the levels of stamina that Wu achieved on his training, Dragnar should still be far superior to the likes of Demetrius, who can withstand a long beating from a far stronger opponent and still fight. Furthermore, the Energeia reserves of this knight far outclass said warrior or any beginner class adventurer: He has faced many battlefields and emerged victorious, being capable of enduring long journeys and extensive combat in warzones.

Intelligence: Dragnar is a seasoned knight who knows his way around the fields of battle. He is also knowledgeable about several kinds of sorcery, and is quick to think of ways to survive, even when put under pressure. Situations where his life is on the line do not affect his rational thinking and capability in the slightest: His mental fortitude is notorious.

Key: With Armor | Without armor

Philosophy of Life: Aquila non capit muscas. (The Eagle does not catch Flies.)

Values: The freedom and pursuit of one's own goals, even if through force.

Likes: The feeling of battle - especially against those powerful enough to defy his own strength. Those who strongly follow their convictions.

Facts about the character

- Themes I associate with his appearances thus far are, for obvious reasons, the ones from Fire Emblem, where his image also cames from (which is Zelgius for those not familiar with the character).

Retrieved from "https://fcoc-vs-battles.fandom.com/wiki/Dragnar_Eridanus?oldid=225486"
Community content is available under CC-BY-SA unless otherwise noted.