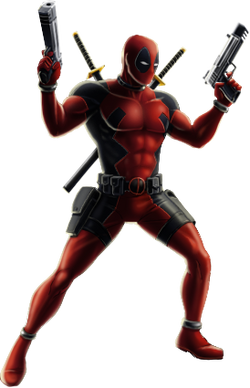 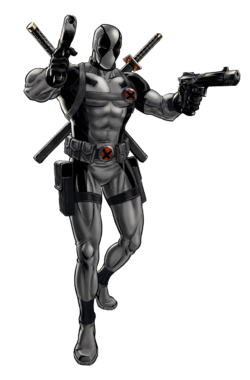 Is this an interrogation? I bet you want me to tell you that I am a wise-cracking mercenary with a regenerative healing factor - basically a better version of Wolverine. Or you want me to say I have a keen sense of fashion and a gorgeous face. Well I'm not going to! This 'Merc With a Mouth' is keeping his mouth shut this time! Official Bio

Ha, look how lazy this guy is. He just copies and pastes the bio from my profile, about some silly game and calls it at that. Haaa. Anyway you know already who I am, the merc with a mouth, the guy who writes and stars in his own shows, games and successful movies. Oh? You didn't know I made them? Of course I did! I'm not going to let some crummy company like Disney have control of me, they couldn't write a trilogy of great movies, even if it was written in the stars.

Criminal Record: Extensive, but frequently purged as payment for jobs with various governments

Powers: Deadpool has a "healing factor" derived from the mutant Wolverine while he was a part of the top-secret Weapon X program. In addition from quickly healing from most wounds, Wilson is also immune to all poisons, toxins, and diseases.

Abilities: As one of the world's most accomplished and feared assassins, Wade Wilson is a master of a variety hand-to-hand and weapon techniques.

Unique Weapon(s): Though Deadpool has been known to use every means of destruction even conceived by the mind of man (and invented one or two of his own), his signature weapons are his samurai swords and twin pistols.

Known History: Wilson volunteered for the Weapon X program as a potential cure for the terminal cancer ravaging body. While the artificial introduction of Wolverine's healing factor saved his life, it also preserved his cancer: The malignant cells are in a constant war for control of the rest of the body, with never side ever able to be defeated. This constant struggle has driven Deadpool insane.

The clinical diagnosis of Deadpool's condition is "dissoviative identity disorder." The way Deadpool describes it, he has three internal monologues going inside his brain at all times: His own, one that constantly contradicts him, and a third he simply calls "The Writer."

On the other hand, Deadpool does lie a lot.

Observations: "Yes, I know Deadpool has never failed any assignment we've given him. Yes, I know he has completed missions rated 'Impossible' and 'Super Double-Dog Impossible' with laughable ease.

But our S.H.I.E.L.D. Psych Profiles suggest his mental state is rapidly degenerating. While his psychosis typically manifest itself in him thinking he's a character in monthly-published comic book series, now it's evolved into him thinking he's a character in a video game -- one on Facebook, no less. Our shrinks say they've never seen such a bizarrely specific series of delusions before. He keeps asking us to "friend him" and "gift him Shawarma ," whatever the hell that means. For that reason, I think the agency should carefully consider any attempts to hire Deadpool in the future. He may have simply become too unpredictable for S.H.I.E.L.D. to safely employ." -- Maria Hill Marvel XP Dossier

All previous powers plus, allied X-Force members do extra damage to statically enhanced enemies, regenerating enemies and enemies with a forcefield, can change between a brawler and blaster stance, Regeneration (Mid-High)

Attack Potency: Boundless (I'm the best there is after all and am clearly the best and strongest on this silly wiki full of all sorts of characters), Wall level+ (Scaling to Captain America physically) | Multi-City Block level (Attack should be similar to this durability feat)

Durability: Boundless (You can't kill like, the best character from comics period. Seriously, I'm awesome! Why would you want to kill me off? It's not like any writer can kill of the amazing Spide- I mean Deadpool!) Wall level+ | Multi-City Block level

Stamina: Godly. His regenerative abilities allow him to keep fighting seemingly almost endlessly, which is enhanced even further in his Uncanny form. He should have a limit, but it's so high he hasn't discovered it yet.

Range: Melee range, extended melee range with swords and the health bar, up to hundreds of metres with his guns

Intelligence: Gifted. Although he's completely insane, he's very resourceful when it comes to assassinating, murdering and dismembering people in all sorts of ways. His insanity and smarts makes him incredibly resourceful and deadly, a combo that should be feared and respected. Aww, he thinks I'm a deadly assassin who enjoys being stained in the blood of my enemies... He's so right... Murdering people is so fun... I get high on watching people wet themselves before I cut there bodies into pieces. Ahhh, good times...

Weaknesses: Is completely insane and unpredictable That's a weakness!?!

Note: I will be comparing Deadpool to his 616 counterpart, so I'm giving credit since I will be taking some content from his page from here and here. More like you were too unimaginative and stole ideas from other people's work, seriously, what's up with this guy?