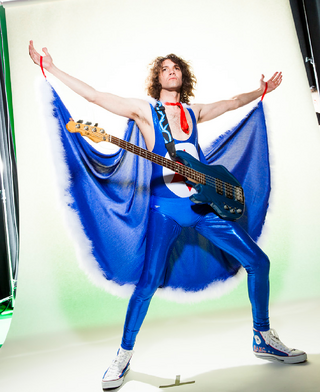 Powers and Abilities: Superhuman Physical Characteristics, Martial Arts, sometimes Genius Intelligence, Flight, Electricity Manipulation, Duplication, Explosion Manipulation, Self-Sustenance (Type 1), possibly Non-Physical Interaction/Soul Manipulation (Stated that Ninja Brian can stab people's souls, and Danny should be able to do the same), Size Manipulation (Can shrink in size to the point where he can be held in a hand and grow to be bigger than Peru), Space-Time Manipulation (Type 1; Ripped a hole in space-time by thrusting), Portal Creation, Time Travel (With his time machine/spaceship or by thrusting), Regeneration (Low-High; Regenerated from a puddle of blood), Enhanced Senses (Has the sight of an eagle), Energy Projection, Clothing Manipulation (He is capable of instantly changing his clothes as well as the clothes of others), Empathic Manipulation (His music is capable of making people extremely lustful), Biological Absorption/Power Absorption (Can absorb the powers of things by eating them) Resistance to Soul Manipulation (Can survive without a soul)

Lifting Strength: Class 5 (Is comparable to Jack, who was able to effortlessly pick up a car and throw it into the air.)

Range: Standard melee range by himself, extended melee range with his guitar, interplanetary with energy projection

Intelligence: Varies from below average to extraordinary genius

Weaknesses:He is very overconfident and is sometimes very gullible and idiotic

Retrieved from "https://fcoc-vs-battles.fandom.com/wiki/Danny_Sexbang?oldid=237109"
Community content is available under CC-BY-SA unless otherwise noted.