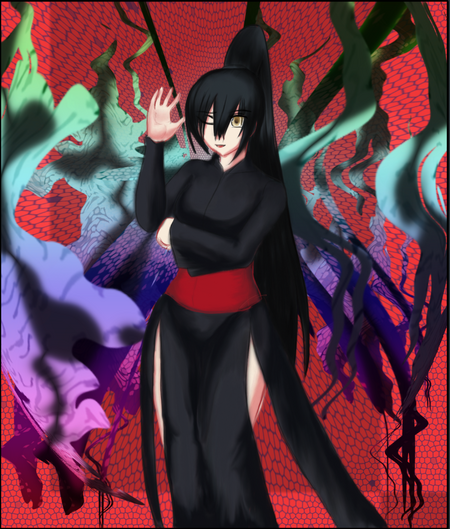 A character made by FateAlbane, part of the narrative in the Castle Chaos RP.

More well known by her surname and title, Alhazred's the leader of the Isfetiamat Unit which carries her name. She was the Main Antagonist of the Castle Chaos adventure. As such, she was also the final boss of the First Arc.

Alhazred was one of the only survivors among the experiments made by the Ur-Shanabi, in which they attempted to transfer unique abilities into different children. She constantly had her abilities extracted from her, to the point that she sometimes went comatose, only to wake up and have it happen again.

Eventually though, there was a success in the form of Dragnar Eridanus, who gained immense power from the experiments, before shortly breaking out with Alhazred, killing all the researchers and those who were turned into horrible abominations.

As they escaped, Alhazred eventually became an enforcer of chaos, meeting Dragnar several times and growing close to him in spite of how ultimately, she was the one to bring him his suffering.

After Dragnar died, Alhazred merely became more dead set onto her goal: remaking the world again, returning it to chaos before forming it again in such a fashion that everyone's souls are linked, and they will have whatever pain they cause reflected onto themselves. In such a world, eventually, everyone will cease harm against eachother and find peace among the chaos.

But, such a plan could never come to fruition, as she came into opposition of a party of adventurers with just as much will as her, clashing in a fight that tested the limits of the world and probability, eventually resulting in Alhazred's defeat, being knocked unconscious by Wu, and having her ritual destroyed by Gal.

Alhazred tends to take a colder front to those around her, maintaining a stoic look as she acts. However, this is merely to distance herself from those around her, and to make sure her enemies do not find sympathy in her. In reality, the tragedy of Alhazred is that she loves all, and so, she loves no single thing. Her eyes are entirely set on her goal, to the point that she was even willing to strike down her own daughter... Only to find, she still loved her daughter, and held back enough so they could keep up their attack. This lead to her downfall, as she wished everyone to understand eachother, but did not understand that what she had could never be without pain, and that her adversaries were those hardened by the conflicts in their world that she wished to take away.

Superhuman Physical Characteristics, Use of Energeia grants her Energy Manipulation, Aether Manipulation (Energeia was stated to be an ethereal substance - and also what powers mortals, nature and every aspect of the world), Extrasensory Perception (for Enhanced Sight, Life Detection and Power Reading), Reactive Evolution (Those who possess Energeia can grow acclimated to and develop resistance to adverse effects on their being), as the defensive capacity of Energeia is directly proportional to its offensive means, Alhazred is resistant to powers she has displayed.

Magic (weaponized Magic is one of her applications of Energeia. Since Energeia is what makes Reality into Possibility, Magic is a form of shaping reality according to the user's will and whim - within the limits of their power and spells), Non-Physical Interaction (Magic/Sorcery can affect or damage otherwise intangible beings and substances), Light and Darkness Manipulation (can also be used for Corruption of living beings, spirits, objects or even parts of the world), Flight, Statistics Amplification (by focusing Energeia), Pocket Reality Manipulation (skilled in Realm Creation Sorcery), Matter Manipulation (On a quantum level - with the Disassembling Sorcery or Chaotic Coalescence of Creation), Corrosion Inducement (With Anti-Restore Sorcery), Forcefield Creation (with Deflection Sorcery and Runic Barriers), Portal Creation (with Portal Sorcery), Spatial Manipulation (can also generate space and expand it into vast landscapes with Spatial Sorcery), her power at times damaged the party down to the Energetic Level, which means her actions can also affect/damage in Body, Mind and Soul at once, Weapon Creation (With Photoncalibur), Teleportation, Vibration Manipulation (can make her Auramental power invade someone's body, generating internal shockwaves that destroy the flow of one's power and rupture the target from the inside out).

Longevity, Necromancy, Summoning (can summon Dragnar), Subjective Reality (via Llusion: Irony), Existence Erasure, Duplication, Chaos Manipulation (can also evoke the Chaotic Aurora to return Creation to Chaos), Conceptual Manipulation (Type 2. Manipulates the Conceptual Boundary transcendent to the Interstice of Reality and Illusions), Power Nullification (of the Resistance Negation type with Multi-Layered Sorcery/Abilities. Can also Nullify powers by making their activation or effects into an illusion.), Healing (claimed she could have healed Serpens with her Unique Art - couldn't do so to herself in the final battle due to focusing the flow of her own Energeia in the Ritual and being finished in a single combined blow of many at the end), Astral Manipulation, Probability Manipulation (Can reduce nearly every present possibility, scenario and pathway that leads to her opponents succeeding to illusions, making them vanish on their own), can turn the very Notion that she needs Time to take an action into Illusion for instantaneous movement and thus she's also able to move in Stopped Time, Clairvoyance (for Enhanced Sight and Battle Precognition), Telekinesis (Launched Serpens away with a casual swing of her arm).

Resistance to Elemental Manipulation of various kinds, and several other powers as listed here.

Attack Potency: Country level (The strongest character in the series during the first Arc. Took the entire party's combined efforts to face her in battle. Stated she could potentially wipe out the entire kingdom of Lucasta. Even while significantly weakened, Nerissa "Siren" Wanwisa still remained cautious when carrying her out of her cell)

Speed: At least Relativistic+ (Alongside Aucta and Siren, the fastest character in the series). Speed of Light with Laseray Sorcery of Sirius, Can turn the time it takes to perform actions into illusions, going as far as to be able to act in stopped time.

Lifting Strength: Class P (Much stronger than Azure, who could hold back Death's Maw's attack)

Durability: Country level (Someone's level of Energeia scales to their defensive capacity, making the person's body as resilient to damage as the destruction their powers can bring. Fought several party members one by one, then all together in the final battle. It took the combined might of their powers, Miko's prayers, the Sword of Roots, blessings from the Cat's Eye and ultimately Gal's use of Chaos itself to overcome her defenses.)

Range: Thousands of kilometers, possibly higher (her powers could affect the entire Kingdom and it was said that if not for the Aetherys and her own mindset, misuse of it would have erased it before the time of the story even arrived).

Stamina: Godly. As a result of the experiments she had to endure in her early years of life, Alhazred developed a massive resistance to pain and her body has enough reserves of Energeia to unleash high level sorcery time and again (such as multi-layered Realm Creation sorcery), as though she's using low level spells. Fought party members one after another and did not show any signs of tiring even as she went on to fight the entire group together. Did all this while using her Energeia to keep a ritual going across the whole kingdom - something she considered only herself capable of doing. Her defeat was recognized by every other unit leader and Sephiria herself admitted it was a setback for the Isfetiamat to lose her.

Standard Tactics: Alhazred is very liberal in her use of Sorcery, using her high level of Energeia to destroy the opponent by whatever means. Her Unique art is also frequently used, erasing time to perform actions instantly or turning projectiles into Illusions.

Intelligence: Likely Genius, by virtue of how long she has lived. Studied several branches of sorcery, on top of having seen many battlefields she had to overcome. Was the Unit Leader of the Isfetiamat and in charge of operations throughout the whole continent of Daldarei -- a position that Sephiria definitely wouldn't hand to someone without at least this level of intelligence or experience in tactics and wars.

Alhazred's ability is known as Llusion: Irony. She can control Illusions and reality, being able to turn illusions into reality, and reality into illusions. This ability has been applied in various different ways:

Hobbies: Observing the night under the stars in flower fields, cooking, tending to a garden.

Values: Understanding, the lives inhabiting the world and their future, her unit members - especially Serpens and Dragnar, each for their own reasons. The memory of the children that were lost in her past.

Likes: Flowers, peaceful moments, small animals. Secretly, most of her likes and hobbies are rather mundane things.

Dislikes: The way the world functions, to see others in pain, the "shackles of Fate". Deep down, herself and to some extent, her own power (for being the source of so much misery but at the same time the one thing she could use as instrument to the world's transformation).

Facts about the character

- As of the Second Arc, I associate her presence/influence with Kuu's Theme.

- ...Out of every villain and/or antagonist I've written and from an author/omniscient narrator perspective, Alhazred is the most sympathetic "character who opposes the group" in my eyes.

- I try to give her an air of majesty of sorts. But she was also meant to have a notion of "weakness" in her character and care towards others, which she recognizes and for the most part either accepts as part of being human or actively tries to overcome ~ fight against. She may be "a person that truly and absolutely carries on the path she has chosen, but still stops at times to look at the other roads she is not taking, wondering how it could have been before marching forward once more".

- As she explained near the time of the final confrontation, Alhazred only resorted to killing the minimum people necessary for the conclusion of her plans. This still doesn't change the fact that, unlike pretty much every other Unit Leader in the Isfetiamat, she actually considered the weight of most lives she had to take.

- I always found relatively interesting how most of her decisions were always supposed to have a duality in regards to what should be good for all, while trying to not weight what should be best for herself... Without a doubt, at some point she would have asked of herself if her methods were really "more for others than herself". Truth be told, if this wasn't the case, she wouldn't have suffered as much, undergoing this path.

- Though she is not a witch, Sephiria actually adresses her with the same amount of respect as one. It is quite the honor, all things considered: Witches are technically seen as from the same lineage as her. Therefore when directly speaking to Alhazred, she treated her in the same way she would family. The reason for that being likely... *Spoilers*.

- I like to think she was seriously holding back on laughing not to hurt Laz' feelings when he ran away from her thinking he would be killed, just because the place was creepy and she turned to ask his name.

- It's relatively hard to put into words, but when I first started her character concept, the general idea was sort of... "An antagonist that is supposed to hold inhuman power, yet is far more human than many of those around her".

- As far as the narrative goes and things change, who knows... They do say each can make their interpretations of the author's creation.

Retrieved from "https://fcoc-vs-battles.fandom.com/wiki/Crescentia_C._Alhazred?oldid=229285"
Community content is available under CC-BY-SA unless otherwise noted.