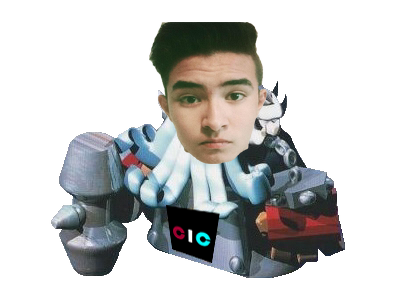 Crazy is Crazy is the leader of the Red Universe, a powerful militaristic force set on conquering every social media. At the beginning of Part 4, he wages war on Google+, sending resurrected versions of every villain the memers had faced, amped to higher levels of power then before. Though, with the help of a new ally, the memers were able to fight back, and eventually defeated every one of CIC's generals, forcing a direct confrontation.

The battle was fierce, as memer turned against memer due to CIC's powers, but, Left was eventually able to put them on the ropes, before CIC pulled out the Deviantart mask, giving him enough power to wipe out Google+, Heaven, Hell, and all the memers and gods within. Though, even with such power, he was no match for Leawith when he unleashed Hot 10+ and restored peace once and for all, sending CIC to the void of an afterlife, where he was forever tortured by the very things he resurrected.

Classification: Leader of the Red Universe

Powers and Abilities: Superhuman Physical Characteristics, Mind Manipulation (Anything he touches goes under complete servitude of the Red Universe. This ability allowed him to take over YouTube, which is portrayed as a planet. He can also use the CICdrome to mind control an entire planet if given enough power.), Resurrection (Can use the Red Universe to bring back the dead, turning them into his minions), Energy Projection, Bone Manipulation and Teleportation via Sans powers (Can gain the powers of Sans, allowing him to fire Gaster blasts, bones, and teleport.), Sound Manipulation via Fazbear powers (Can release extremely loud screams, deafening anyone nearby) With the CICdrome, he has Flight and Energy Projection | Same as before to a far greater extent, along with Matter Manipulation (Was able to disintegrate Google+, Heaven and Hell along with all of it's inhabitants), Existence Erasure (Would have reset the entire internet with his second snap, erasing everyone from existence, including the souls that had gone to the void after Heaven and Hell was disintegrated), Flight, Explosion Manipulation (Can create bombs that explode mid air), Black Hole Creation (Can create a bomb that generates a black hole, though, he cannot maintain it for long without exhaustion), Portal Creation (Can generate portals which fire lasers), Immortality (Type 2. Even after his head was burnt down to a skull, he was still able to fight)

Attack Potency: At least Building level physically (Vastly superior to the memers, including the likes of The Sexelent Spy), Multi City Block level+ with the CICdrome | Dwarf Star level (Casually disintegrated Google+, Heaven, and Hell, along with all of it's inhabitants. Was able to create a black hole)

Speed: At least Relativistic+ (Could keep up with the memers in combat) | FTL (Contended with Hot 10+ Leawith)

Durability: At least Building level (Was completely unharmed by attacks from an enraged Leawith, even going as far as to not flinch to his Consecutive Hot +1) | Dwarf Star level (Took various blows from Hot 10+ Leawith, but was eventually killed)

Intelligence: Average (Lead a global conquest on YouTube and Google+, but does not seem to be particularly skilled in tactics or deployment of his forces, just using brute force to try and take over.)

Weaknesses: He suffers from Arrogance, toying with his opponents and sending his constantly failing minions to do his dirty work. Maintaining a black hole for too long will exhaust him. His powers do not work on spirits.

Retrieved from "https://fcoc-vs-battles.fandom.com/wiki/Crazy_is_Crazy_(Spy%27s_Sexelent_Adventure)?oldid=309423"
Community content is available under CC-BY-SA unless otherwise noted.