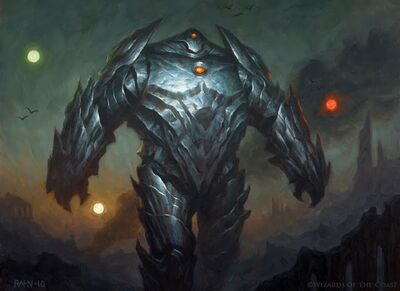 Gaul is the king of stones, and the first one ever. He was responsible for giving humans magical powers due to his exploits in Vailord. He was born in Vailord, a place where all concepts and things stem, tho he later destroyed when taking the "Magic Rock," which he gave to humans. As king of stone, he is responsible of protecting the massive planet of Terramaximus from danger, tho he usually just smashes things he doesn't like and sits down on some flat land and pretends he's a small mountain, which is commented on its strange ability to work due to his earth manipulation, tho this doesn't really explain how he does it. Even tho he is a mountain, he appears more golem in physique but has no true head. This is undeterred by his ability to see and hear perfectly through unknown means. After giving magic to the humans, he made himself into a massive underground cave system called Gaulic Caverns, in which he waits for his kingdom to wake him up when they need him, as walking around made him too bored, and there was nothing really left to do, so he decided to just lay down and take a rest like walking rocks. Due to his nature as a Vailordian, he has a multitude of powers usually reserved for being of higher stature, such as his transduality which is explained in the notes, along with his invulnerability and various other powers.

Gender: Genderless, though referred to himself as a "He"

Powers and Abilities: Superhuman Physical Characteristics, Regeneration (High-Godly) (While in Vailord, smashed a copy who is said to be a near-perfect copy of himself's "very existence, with all of its dimensional structures crushed, no matter how large or complex it may be and made it darker than the darkness of nonexistence!" in which his copy was noted to "poofed and went down up and kept on swinging,"), Immortality (Types 1, 2, 3, 5, 8; He is unable to die from age due to his resistance to decay that usually happens to extremely old rocks, as a rock, he is not conventionally alive nor dead and destroying part of him won't kill him, has regeneration, and was noted that "And if there is a stone to protect, there is a king, and until there are no rocks, he will exist as their king,"), Magic (Via Magic Rock), Acausality (Type 5), Body Control (Has control of the rocks that make up his body, can make it so he turns into a small mountain), Martial Arts (Via Rock-fu), Telepathy (Can hear thoughts of rocks that reference his name) Which was said to have worked completely), Portal Creation (Created a portal to Vailord (Using his Iron Gauntlet), Statistics Amplification (Via Rock-fu and The Iron Gauntlet), Dimensional Travel (Via creating a portal to Vailord), Elemental Manipulation (Via Magic Stone), Energy Manipulation (Via Gauntlet of Iron), Self-Sustenance (Types 1, 2, 3), Enhanced Physiology (Via being a living mountain), Existence Erasure (Via rock-fu), Shapeshifting (Via his control of the rocks that make up his body, he can turn himself into a mountain), Size Manipulation (Via rock manipulation), Invulnerability, Soul Manipulation (Was stated to have destroyed his copy's soul), Inorganic Physiology (Type 2 by being a rock), Large Size (Type 3 by being a living mountain), Power Nullification-Immortality-Regeneration-Resistance Negation (Was able to bypass his copies invulnerability and immortalities which scales to his. Capable of stopping his copies high-godly regen with his iron gauntlet, his rock-fu can negate mid-godly, and his base attacks can scale also negate mid-godly), Metal Manipulation (Via Iron Gauntlet), Logic-Manipulation (Via rock-logic, which allows him to become immune to almost all abilities within his reach of scaleand one shot almost anything within his reach of power), Non-Physical Interaction (Interacted with a metaphysical realm), Nothingness Manipulation (His rock-fu made his copies less than the nothing of Not, which), Immutability (As a Vailordian and with his Rock-Logic, he was invulnerable to his own hax and attacks), Cosmic Awareness, Resistance to all stated previously, when applicable including: Mind Manipulation (Is a rock), Biological Manipulation (Via inorganic physiology), Poison Manipulation (Via inorganic physiology), Disease Manipulation(Via inorganic physiology), Life Manipulation (Via inorganic physiology), Death Manipulation (Via inorganic physiology), Pain Manipulation (Via inorganic physiology), Power Mimicry (A copy of his was unable to copy his rock-fu), Durability Negation (Immune to Gregarious Flame, a flame that burns all matter no matter how durable), Plot Manipulation, Disbelief (A being named Headless Heaven was unable to destroy Gaul by stopping believing in his existence), Matter Manipulation (Vailord itself was unable to bend his quantum enough to destroy him), Reality Warping (Alpha reality is the type of reality he negated), (Vailord itself was unable to bend reality enough to destroy him), Physics Manipulation (Resisted Vailord manipulating the metaphysics of the universe), Empathic Manipulation (Via being a rock) | All previous, including: Beyond-Dimensional Existence (While in Vailord, which is a place beyond dimensions), Large Size (Type 11), Acausality (Type 5), Immortality (Type 10), Beyond-Dimensional Existence (Type 3 while in Vailord, a place beyond all dimensions and hierarchy of size, which equates to a scale far beyond absolute infinities), Abstract Existence (Type 1 - Embodies kings, and what is eternal)

Attack Potency: Multi-Continent level (With jumps), Planet level (Shown Here), Varies, at least Small Planet level, likely far higher (Rock-Fu was able to instantly destroy his copy, and is able to destroy almost anything within Gaul's range), At least High Outerverse | Hyperverse (Was able to harm a 12th dimensional object; Can also use said object), High Outerverse (Was able to harm his copy, who in turn should scale to the Vailord destruction feat), At least High Outerverse (Destroyed Vailord, a beyond dimensional place beyond a hierarchy beyond that of absolute infinity using Rock Logic)

Stamina: Infinite (Is a living rock) | Irrelevant (Inside Vailord)

Range: Tens of Kilometres with punches (His arms are 3/4th his height of 44.98 kilometres, and should be 33.735 kilometres) | Planetary with jumps (Stated that Gaul could cause magnitude 15 earthquakes with his jumps, which are more than the 14.0 earthquake needed to be felt from Tokyo to Los Angeles) | Interplanetary (With his voice) | High Outerverse (Inside Vailord, as it's a place beyond a dimensional hierarchy that of absolute infinity)

Intelligence: Below Average (is not the brightest, and barely recognizes things that aren't in his field of view, but is still able to have complex thought, tho it is limited to the situation and setting)

Standard Tactics: Ignore if it's too small | If of challenging size, smash it, or stomp it. | If it still won't die, use rock-fu | If it still won't die, use The Iron Gauntlet | If this thing is a rock, then go to Vailord and chuck some higher-dimensional rocks at it | If this thing is a really powerful and just won't lose, use rock logic and beat it up

Weaknesses: Isn't the smartest, and won't really know that anything that isn't in his direct train of view exits. Easily gets angry.

Feats: Can cause magnitude 15 earthquakes with his jumps, and easily destroyed a mountain at this speed. Beat up a rock with the same attack potency as him while in Vailord, which is his copy. Destroyed an infinite 12th-dimensional object known as the Magic Rock and Destroyed Vailord.

Notable Attacks/Techniques: Punches, stomps, kicks, and rolling. | If the rock isn't destroyed from there, use rock-fu and his Iron Gauntlet. | If it is still rolling, use Rock-Logic

Notes: Rock-fu is a power in which it makes it so his attacks become are boosted to the point that they destroy most opponents in a single attack, though it is unknown how far it can scale. It also makes it so anything that comes within striking range, no matter how fast, will get hit by a Rock-fu strike, as it's speed seemingly time and it slows down the opponent to infinitesimal speeds, with varying results. The range of attack stays the same, however. | The Iron Gauntlet is a gauntlet that burns with the heat if a supernova, and acts as a key that allows him to access Vailord. It also can form into a metallic suit that allows him to manipulate most geological substances to a higher degree, and shoot beams of pure energy. This also grants him a higher form of telekinesis. | Invulnerability is used for anything that won't immediately kill him won't do damage, and things that should be able to kill in a single shot base will only do enough damage to slightly damage him. His invulnerability scales, as he can become completely invulnerable to most attacks, and also have the effect of nullifying most hax that cannot scale to his own. | The level of his power shown was not his full potential, as this was an extremely casual Colosseum. Due to his Rock-Logic, he can project himself higher, to an unknown extent.

Retrieved from "https://fcoc-vs-battles.fandom.com/wiki/Colosseum?oldid=311115"
Community content is available under CC-BY-SA unless otherwise noted.