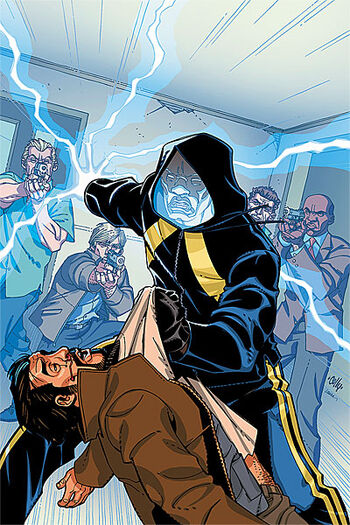 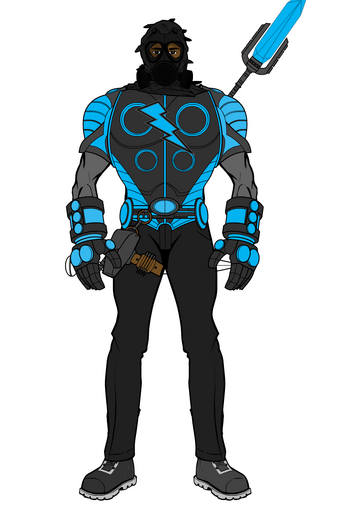 Cole Thompson is an alternate version of Cole MacGrath from across the infinite multiverse, and the main character of InFAMOUS Prime. He is an Alpha-level Conduit. Cole was present in the event known as The Blast. After those events, Cole discovered that he had electrokinetic abilities. Once he donned a suitable costume, he became known all around Empire City as the Infamous Bolt. After the death of his father, Cole vowed to save Empire City from other potentially dangerous individuals like himself.

Before the Blast, Cole was scrawny, dark skinned, bald, average height and weight, wore glasses, a red plaid, button-up shirt, dark blue jeans, and gray shoes. After the blast, Cole's apperance didn't change much, except now due to his exercise as the Infamous Bolt, he is more muscular and fit, wears sunglasses, a white, long sleeve t-shirt with a short, light blue shirt over top, light blue jeans, and blue sneakers.

Cole Thompson is one of two halves of his counterpart. Like his counterpart's good side, Cole Thompson is more concerned about the needs of many others, even the needs of a few others, over his own needs. He will come to the rescue of even his own enemies. Cole is not willing to kill anyone, not even his enemies. (Though in some cases he will.) Cole's powers also changes to adjust to his mental state.

Attack Potency: City level (Survived the Ray Sphere Explosion, which destroyed several blocks of Empire City. Can casually convert the mass of bullets into energy via Frost Shield) | Multi-Continent level (Is on the same level of Omega-level Conduits such as The Beast and The Darkness, who are stated to be able to tear the world apart, and the former was able to tap into the energy of the Earth itself)

Intelligence: Genius. Cole's electricity can speed up electrical signals in his brain, making him think faster than a regular human. Even before the Blast, Cole Thompson was an exceptionally brilliant engineer. He is able to take virtually any old object or device and rewire or rebuild as his own. Can fight against seemingly overwhelming odds with ease. The Infamous Bolt is known to be a terror on the battlefield, defeating his enemies single-handedly and with near supernatural finesse. Has the ability to mentally sense and patch into radio and transmission frequencies to raging proportions and power-levels.

Expert Engineer- Even before the Blast, Cole Thompson was an exceptionally brilliant engineer. He is able to take virtually any old object or device and rewire or rebuild as his own.

Indomitable Will- Cole has an unusually strong and powerful force and strength of will and willpower. Cole Thompson has faced a great deal of physical and mental pain throughout his superheroic career, and he gets through it all with strength and a prayer. ​

One-Man Army- Cole Thompson can fight against seemingly, overwhelming odds with ease. The Infamous Bolt is known to be a terror on the battlefield, defeating his enemies single-handedly and with near supernatural finesse.

Cyberpathy- Cole Thompson's mental and electrical abilities have increased, in which now, he has the ability to intercept, generate, interpret electronic, digital, and radio transmission mentally. His powers include:

Cryokinesis- Cole Thompson was fighting with the leader of the Dust Men specialists for ownership over a Rayacite Core. When the ensuing battle got heated, the Core started to glow. Due to Cole's elecricity and the other Conduit's ice ability, the Rayacite Core exploded. When Cole awoke, he felt a new pulse of energy in his body. Afterwhile, Cole discovered that he had a new ability: Cryokinesis. His powers include:

Cole Thompson's "Light Form" (formerly)- Cole McGrath had bonded to The Darkness and was wreaking havok all over Empire City. Dark Cole/Cole McGrath was so strong that he even overpowered the likes of the Infamous Bolt, Shadow, and Glamour. Afterwhile, Kessler appeared with a device that transfers powers from a conduit into another individual. Trish Dailey opted to transfer her powers into Cole Thompson temporarily. When Trish transferred her powers into Cole Thompson, he became a pure force of light energy. His powers included:

Note: Not to be confused with his main timeline counterpart.

Retrieved from "https://fcoc-vs-battles.fandom.com/wiki/Cole_Thompson_(InFAMOUS_Multiverse:_%22Prime%22)?oldid=208778"
Community content is available under CC-BY-SA unless otherwise noted.