FC/OC VS Battles Wiki
Register
Don't have an account?
Sign In
Advertisement
in: Tier 9, Tier 8, Tier 7,
and 51 more 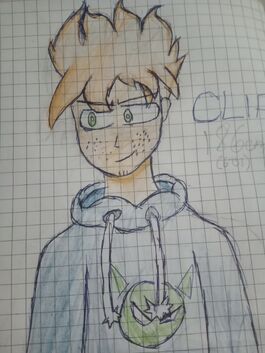 Clifford (or simply known as Cliff) is the main protagonist of Siro Intruders and a professional Siro wielder, he is well-known for how efficiently he does his job, he works for the SPA (Siro Protection Agency). Cliff trained himself to master his Siro (Blitz)'s ability of Oil and use it for himself and uses in many, many unique ways ranging from creating a power wave to making literal bombs.

Cliff is a tall boy with an athletic build, having noticeably bigger muscles than the average person but not that of some boxers, he has warm green eyes and spiky gel'd up ginger hair with freckles all across his face and even spreading to the initial parts of his arm. He has a broad, wide and large smile and usually has small gear around his wrists to help him use his abilities better.

Cliff takes a huge growth due to Blitz support, without him. He begins as a hectic person, he isn't the best at being seen as a hero as he's very snarky and rebellious, until he met Blitz, with the circumstances given he had to become a more quiet and stable person, showing that he was somewhat unhinged from some of the things he's done, though this gets quickly sorted out with during the timeskip though they still exist deep inside but they are mainly kept as thoughts, after defeating the Siro tyrant Sypho he became pretty balanced, not too loud, not too crazy and he had to become smarter as he could not mess up, he had nowhere to recover for a long time so a fatal injury could lead to him being left to die. He had lost his home, however, this left him to be an extremely stressed out person and he had really horrible willpower and confidence, he didn't have much before but now he had less, after the timeskip, he grows some motivation after growing up and 4 years passing, Blitz then gives Cliff motivation by talking to him on how he should be when trying to commit to his tasks, Dusty also occasionally dropped advice. At TGD, he was somewhat nervous but after the climax of his initial fight, he became a determined and dedicated person being even somewhat charismatic and inspiring himself, he wasn't a gifted person who'd always win, he had several losses but pulled through alive, now, he was determined to always win so that Siros and Humans can live in Peace.

Likes: Basketball, Most of Nature, Bananas

All of the previous abilities, Martial Arts, Acrobatics, Rage Power (Got infuriated and held on Rev and Dusty while letting Blitz recover from his injuries) Resistance to Pain Manipulation (Suffered many wounds while fighting Dusty consistently without assistance)

All previous abilities, Reactive Power Level (Grew from being destroyed from one Artificial Siro to Destroying many easily towards the end of the arc), Adhesive Manipulation (via the FFP), Electricity Manipulation and Energy Manipulation (Can create energy with Crude Oil), Weapon Creation (Created the Boltzer and other strong plastic weapons that gather a base for explosives and electricity to be more concentrated), Statistics Amplification, Homing Attack, Transformation (via Fuel Drive), Flight via wrapping himself in oil, Smoke Manipulation (Can control the smoke his attacks produce), Poison Manipulation via Smoke Control (Can easily control smoke from his attacks and make them enter people's lungs)

All previous abilities, Durability Negation (Red Pulse, Prime Burst), Deconstruction (His explosions in general can start to break things down slowly, making them more fatal, breaking down as far as to cellular separation), Energy Projection and Plasma Manipulation (His amped version of his lightning bolts are more like a mysterious, destructive and chaotic plasma due to the Flammable Fluid being more used in Cliff's techniques than the oil while retaining properties similar to electricity)

All previous abilities, Enhanced Deconstruction (with OverDrive, it has a significantly stronger affect), Supernatural Willpower

All previous abilities, Light Manipulation, Radiation Manipulation (using Solar Malstrym), Extrasensory Perception, Precognition (His senses go crazy when he is in danger, allowing him to know where the danger is and what it's trying to do), Corruption (Type 2 and 3, Added as a side affect to his Overdrive strikes, similar to his deconstruction, he can destroy things by Overloading them with destructive power)

All previous abilities, Attack Reflection, Higher-Dimensional Existence, Power Nullification, Absorption, Reality Warping (He can heavily reduce the damage he takes and send most of it to the sender, it will even twist the world itself to return it to the sender. If he would of died immediately or been taken out in any sort of way he just doesn't take anything)

Attack Potency: Small Building Level (Cliff could match up to the power of Sypho with his full power who was stronger than Tela) | Multi-City Block Level (Cliff could hold on Rev for Blitz and also challenge Dusty who was stronger than his Siro), higher with Boomcopter (The Boomcopter is a powerful mix of explosions Cliff uses to travel or heavily damage people | Town Level (Cliff could hold his own against people like sherry), higher with Fuel Drive (Completely made the fight unbalanced, could of easily killed Sherry, grants a noticeable power boost and much greater speed boost) | Large Mountain Level (Blew up a mountain), higher with Fuel Drive, higher with Heat Drive (As a power up with even more power than the last, it was able to take down Phoenix) | Continent Level (Survived the Explosion of Spain Arko created), higher with Fuel Drive (He started to somewhat master this, making it a lot more affective at the time it was used), higher with Heat Drive, higher with OverDrive (It was shown to be the strongest of the Drives, though it is the slowest) | Small Planet Level (Being relatively equal to Blitz, his strength shouldn't stray far from Blitz's), higher with Drives (The drives vary focusing on speed, power or both), Multiverse Level+ to Low Complex Multiversal with the Zealor Cloak (Could handle Nexer and throw him several meters away, harmed Bizirel)

Stamina: Very High (Survived 1 months worth of no rest and keeping injured wounds)

Optional Equipment: Zealor Cloak (Only in need of serious situations, his cloak heavily nullifies the damage he takes and returns alot of it to the sender)

Intelligence: Genius (Even while stressed and fatigued, he can easily adapt to opponents and come up with new tricks on the spot as he has done this time and time again and figured unique ways to take out some of his opponents, could understand and manipulate the properties of oil and it's capabilities without prior knowledge (education or masters of any kind), can create guns from scratch via crude oil based on what can be made with it and understanding it's properties extremely fast to create versatile tricks)

Standard Tactics: Cliff is a very diverse fighter, he usually lets his opponent get a slight blow and he starts to adapt from the way they fight from then onwards.

Weaknesses: Cliff can "overheat" himself from overusing his Siro-Based ability (Oil), if he completely runs out of hope he'll give up without trying depending on how old he is, he can also be scared fairly easily.

Note: Most of the linked pages are outdated and will be updated later, the calculations for Cliff's tiers can be found here: https://fcoc-vs-battles.fandom.com/wiki/User:C%25%5Eu)*(*l)0%C5%95/sandbox4