FC/OC VS Battles Wiki
Register
Don't have an account?
Sign In
Advertisement
in: Male Characters, Characters, Everybody Wants to Die,
and 65 more 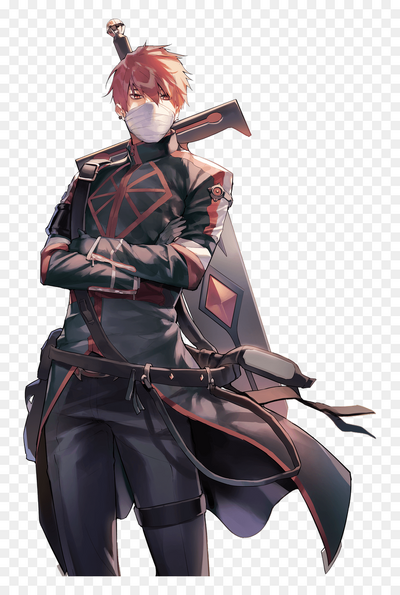 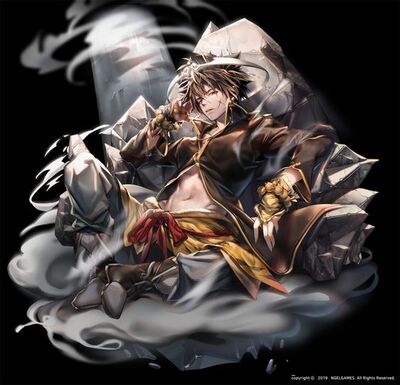 Cain Eldegard was one of the individuals summoned by Ichika Yuuki to participate in her version of Everybody Wants to Rule the World. Before this all occurred, he lived in a post-apocalyptic world that was filled with radiation and darkness that covered the Earth. Strange beasts of darkness roamed around and people used weapons of light to drive them back. The last human settlements were run by a dictatorship, and Cain was a simple scavenger who happened to wield a lamp as his weapon. Like any protagonist would, he went off into the world and fought off the creatures of darkness. Upon his journey he managed to meet a settlement of people who had gained differing powers thanks to the radiation and darkness filled atmosphere. He wasn't able to communicate much with them as he was pulled into Ichika's test.

Cain can be both friendly and wary to people around him, his ideals switching on a whim quite easily. But, he does feel guilt over how he wasn't able to save his world and he instead pours the guilt into helping the Earth into however he can.

Origin: Everybody Wants to Die 2

Superhuman Physical Characteristics, Longevity, Statistics Amplification, Acupuncture and Pressure Points, Pain Manipulation (Can remove his own sense of pain and cause unimaginable pain upon others), Paralysis Inducement (Can stop people from moving and completely turn off body parts), Regeneration (Low), Enhanced Senses, Wind Manipulation, Expert Renewal Taekwondo Practitioner, Reactive Power Level (Re-Taekwondo was stated as being a martial art that changed power levels), Accelerated Development, Instinctive Reaction, Power Mimicry, Non-Physical Interaction, Extrasensory Perception (Wields the power of Mori Jin), Light Manipulation (Via The Light of the Lamp), Fear Manipulation, Limited Size Manipulation and Density Manipulation (Can control the size and density of his Lamp via Controlled Lamp), Acausality (Type 4: Via Charge Power, Ghost of Time which allows him to work on a different set of causality, becoming a ghost in time), Dimensional Storage (Can store equipment in a hammerspace), Immortality (Type 8: Dependent on Ichika resurrecting him if he dies)

Fear Manipulation, Soul Manipulation (His soul has durability), Mind Manipulation, Madness Manipulation (Ichika prevented mind-controlling abilities to affect the summoned and they all resisted Nameless' passive effects), Power Absorption, Complex Power Mimicry (Basic techniques and fighting styles can be mimicked, but nothing higher), Radiation Manipulation (Was unaffected by the massive nuclear fallout of New York along with the other summoned)

All previous enhanced plus Acausality (Type 4 changed to Type 1), all previous powers enhanced plus Weapon Mastery (Can use any weapon to its maximum proficiency), limited Fire Manipulation (Via Empower), improved Martial Arts (Skilled in hand to hand combat), Can increase his defensive and offensive power (Via Counter Strike and Grandmaster's Might), Instinctive Reaction, Teleportation (Via In a Flash), Reactive Evolution (Via Evolution), Time Reversal (Via Charge Power: Reset, which is capable of reversing time 5 meters around him), Flight

Reality Warping, Spatial Manipulation, Time Manipulation, Gravity Manipulation, Existence Erasure, Biological Manipulation, Corruption, Absorption ( Life force, matter, magic, and information), and Soul Manipulation (Able to resist the full effects of The Void) (Wields the power of Jax) Time Stop (Is capable of functioning within areas where time is stopped. However, this does not extend to attacks), Age Manipulation, Transmutation, (The effects of abilities such as petrification and crystallization are massively slowed, allowing him to take measures to mitigate the effects), BFR (Ichika has anchored him to the local universe that her test takes place in)

All previous powers enhanced plus Aura (Explosive/Elemental: Can cloak himself in flames), Body Control (Advanced Control: Can force his body to use its max strength and his mind to speed up its reaction capabilities, deaden nerves, and manipulate his own rate of regeneration), Breath Attack, Durability Negation, Danmaku (Via Fire Heart), Fire Manipulation (Via Fire Heart), Limited Space-Time Manipulation (Via Violet Fire), Flight (Via Wings), Limited Heat Manipulation (Via Fire Heart), Homing Attack (Via Fire Heart), Immortality (Types 1, 2, 3, and 4: In order to properly kill him, the flame in his chest must be snuffed out after exhausting its strength), Information Analysis (Via enhanced senses, through combining his enhanced senses, Cain can determine one's current physical condition, emotional state, and physical habits), Magic (His fire and body are covered in magic), Natural Weaponry (Via claws and teeth), Resurrection (Via Fire Heart), improved Martial Arts (Skilled hand to hand fighter), limited Magma Manipulation (His body naturally produces magma that he is able to lactate), Transmutation (Via Traduire and Gasshbenirium armor) (Wields the powers of Herah with restrictions on some abilities), limited negation of Reactive Evolution (It takes longer for those granted power to be evolved against, both offensively and defensively, and said evolution is more likely to leave gaps to exploit), Transmutation, Curse Manipulation (Anyone struck with the Flame of Judgement will die once the flame is extinguished), Reality Warping (Via Charge Power: Wish Granting, which allows him to grant wishes, though only ones that can change the present, not the past or future), Statistics Amplification (via Gassbennirum Armor which makes him physically two times stronger and faster)

All previous plus Death Manipulation, Fire Manipulation, Heat Manipulation Corruption (Types 2 and 3: Was unaffected to a significant degree by the changes in reality, which were corrupting goblins), Fusionism and Possession (Cannot be fused with unless he allows it himself, the same applies to possession, additionally, all such things are made temporary by his resistance, even if they were entirely consensual and would normally be permanent, though this only applies to other PCs and some enemies, Limited Mind Manipulation (Can heal his mind if it is ever shattered), Pain Manipulation (Via Renaissance à son Sommet), and Void Manipulation

All previous enhanced plus Regeneration (High-Mid), Shapeshifting, Size Alteration, Elemental Manipulation, improved Fire Manipulation, Weather and Lightning Manipulation, improved Magma Manipulation, Empathic Manipulation (Can create joy, and by extension, sorrow), improved Transmutation, Invulnerability (Is immune from harm via conventional weaponry), Intangibility and Non-Corporeality (At the very least in spirit form) (Wields the power of the Balrogs), Physics Manipulation (Can control the fundamental forces of physics such as Strong Force, Weak Force, Acceleration, Inertia and Friction), improved Resurrection (Has one life for each of his horns, which can resurrect him if used before death), Acausality (Type 4)

All previous from before enhanced

All previous abilities incalculably enhanced plus Subjective Reality, Causality Manipulation, Memory Manipulation, Existence Erasure, Creation, and Reality Warping with Retcon (Nil gave him a portion of Retcon), Resistance Negation with Pierce (Nil gave him a degree of Pierce that was able to break through Zephyr's resistances), Dimensional Travel (Nil gave him the ability to traverse the multiverse)

All previous from before enhanced

Stamina: Extremely High (Will continue to fight unconscious or otherwise)

Intelligence: Very High (Is a master of every conceivable weapon, even things that aren't traditional weapons like a lamppost.)

Weaknesses: Cain can be extremely gullible at times and has shown to be swayed onto multiple sides. Other times he can be extremely stubborn and arrogant, Limiter Removal has a rebound of pain, acupuncture techniques will fail upon those who wear armor.

Fire Heart: Within Herah's chest, in a pocket next to her sits a flame which is both her lifeline and weapon. With this fire, she can breathe flames and even secrete it from the pores of her skin to cloak herself within it. Herah can also choose to have the heat of the flames either burn or not burn those it touches. Her fire follows the idea of blue shift, being that red is the coolest and Indigo is the hottest, with said flames reaching a temperature of up to 210,000 kelvin at their hottest. Doing all of the below drains the strength of her fire with the ingestion of metal, meat, or other flames normally being the only ways for her to rejuvenate the fire.

* The Light of the Lamp: Cain is capable of manipulating light to his preference, being able to cast great beams of light that don't move as fast as light. Not only that but he can use this power to blind others or do other fun stuff.