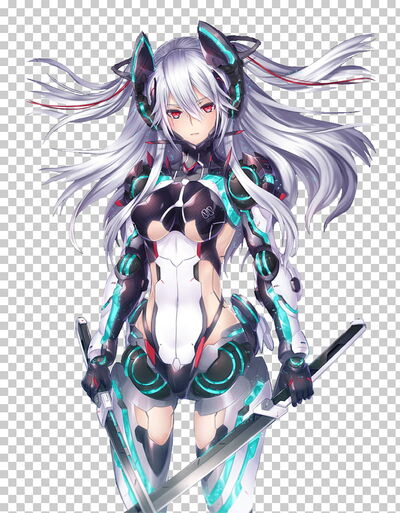 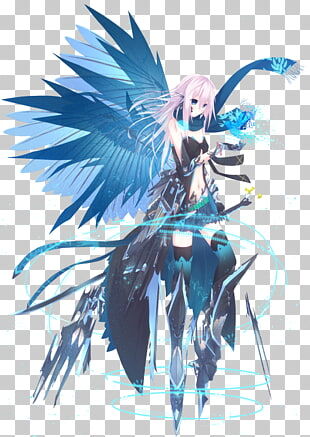 (Note: None of this artwork is mine, all rights respectively go to their original owners)

CHIME was originally an AI built to serve an Aimion alongside another AI named BELL. The two managed to escape the Aimion's clutches and wandered around the universe for a while, going through different galaxies and planets. It was fine for the most part until the two AI got into a scuffle between the Vaundrel, with BELL being captured. CHIME managed to escape but wanting to find BELL again, joined Hope. During a scuffle, CHIME managed to meet Adrian, deciding to join Adrian on her quest to get Newman back to his home planet. This was done in hopes to try and find BELL again in their journey.

In her original form, CHIME is a woman with long, wavy white locks of hair that stretch down to her elbows. Her arms and legs are robotic in nature, having a white and black plating with light blue veins running across. Her body is covered in a white and black armor plating, although the showing skin does not signify a weak point, as her body is entirely metal. She has amber eyes and two plates that signify her ears, being black armor plating with light blue veins running across. In her improved form, she wears a black flowing cape that holds black plating. Now having light blue wings along her back and blue scarf given to her by Adrian. Her metallic legs are disguised as stockings and going into metallic feet that spike upward. Blue strings encircle her being and act as if they are levitating around her.

CHIME is a very literal AI and serves as most of the comedy of the series, still being an AI that was programmed to have almost child-like intelligence. After being improved upon, CHIME understood more of human nature and gained her own personality, that being a more shy and reserved version of her very literal self.

Alignment: Lawful Neutral (Is only driven by her passion to find BELL again) | Neutral Good (Has now understood more about the complexities of life)

Hobbies: Charging herself, standing in the rain, walking along moist ground

Superhuman Physical Characteristics, Electricity Manipulation (Is capable of wielding electricity from her surroundings), Limited Mind Manipulation (Can erase the minds of AIs, essentially killing them), Immortality (Types 1, 2, 3, and 6: Can transfer her consciousness into other forms of technology), Technology Manipulation (Via Type 6 Immortality), Telekinesis (Robots generate a bio-mechanical wave that they can manipulate to do varying things, one such being telekinesis, it is more akin to the soul of a robot.), Forcefield Creation, Weather Manipulation, Elemental Manipulation, Energy Manipulation, Energy Projection, Absolute Zero, Absorption (Heat and Energy), Weapon Creation, Precognition, Healing (Mid, via bio-mechanical wave), Regeneration (Mid: Managed to regenerate from multiple engines being torn out), Limited Density Manipulation (Can control her own body's density), Explosion Manipulation (Via weapons), Self-Sustenance (Types 1, 2, and 3: As CHIME is a robot, she does not need to eat, drink, sleep, or breathe), Homing Attack (Via mini rockets), Information Analysis, Ectoplasm Manipulation (Is capable of manipulating the bio-mechanical waves of other robots, and vice versa)

Lifting Strength: Class 25 (Should be comparable to Adrian, who was capable of lifting up a gigantic stone pillar that weighed the same size of a motorboat) | At least Class 25

Range: Kilometers with Energy Projection and Energy Manipulation, Planetary with Frozen Solid and Final Blaze (Was able to counter an attack made from BELL on the moon of the planet they were fighting on)

Stamina: Infinite (Is a robot, and as such, shouldn't have any need to sleep)

Intelligence: Genius (Is an AI that is capable of studying opponent's moves and understand the basics of FTL travel in a few moments. Is considered the genius of the group by others)

Weaknesses: Due to CHIME's intelligence, it is sometimes hard to understand what she is saying, and this can result in many problems in communication. In her original form, she was near emotionless and this has led to many misunderstandings. If her bio-mechanical wave begins to overload her system, she experiences a crash which results in her body and AI shutting down for a few minutes. This can result in dangerous situations in combat.

Retrieved from "https://fcoc-vs-battles.fandom.com/wiki/CHIME?oldid=297811"
Community content is available under CC-BY-SA unless otherwise noted.