Bear is one of the Stand users appearing in Paradise City. He is a stray cat hanging around Woodstock, Illinois that reveals it's powers in the first battle the RV Crusaders went through, eventually being picked up by them, and playing a crucial role in their final battle against the boss.

Bear is much like a regular cat. He accepts affection when he feels like it, and has a dominant personality, hogging most food for himself. Bear is not afraid of dogs or water. He is also extremely ruthless against those he sees as a threat, usually killing them without thinking at all.

However, Bear does have a softer side, which he shows to those that have earned it, and can be loyal to those he cares about. Bear is also very perceptive, understanding when certain people are exhibiting certain moods, and knowing exactly what to do.

Name: Bear, Tor (by everyone else)

Likes: Sleep, food, places where he ca neat and sleep

Powers and Abilities: Small Size (Type 1), Enhanced Senses (Cats have a higher field of vision than humans. They can see in roughly one sixth the amount of light needed for a human to see well, as well as possibly possessing sensitivity to ultraviolet light. Cats can hear at much higher frequencies than humans. They possess smell roughly twenty times better than that of a human. Cat whiskers are used to precisely detect and analyze nearby objects), Extrasensory Perception (Capable of seeing Stands, along with other supernatural forces like ghosts and spirits, normally invisible), Aura and Summoning (Of his Stand), Godzilla has Superhuman Physical Characteristics, Non-Corporeal (Stands are the incorporeal manifestations of one's vital energy, and can only be harmed by other Stands), Non-Physical Interaction (Stands can interact with ghosts and other Stands), Invisibility (Stands can only be seen by other Stands and Stand Users), Selective Intangibility, Size Manipulation, Plasma Manipulation, Energy Projection, Absorption (Of plasma)

Attack Potency: Below Average Human level (Is just an ordinary cat), Building level+ with Godzilla (An extremely powerful Stand that should be on par if not outright superior to Shoot to Thrill)

Lifting Strength: Below Average Human, at least Class 50 with Godzilla (Should be far stronger physically than Don't Stop Me Now)

Intelligence: Average (Has knowledge on the level of a basic human. Knew to find and bring the Arrow when most needed to the other Stand users of the group)

Weaknesses: Any damage done to his Stand is reflected onto him. Godzilla is very slow in comparison to most Stands. It's plasma pulse drains it rapidly of energy. 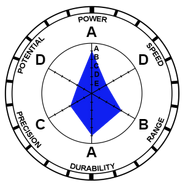 Godzilla's stats
Add a photo to this gallery

Retrieved from "https://fcoc-vs-battles.fandom.com/wiki/Bear?oldid=275027"
Community content is available under CC-BY-SA unless otherwise noted.