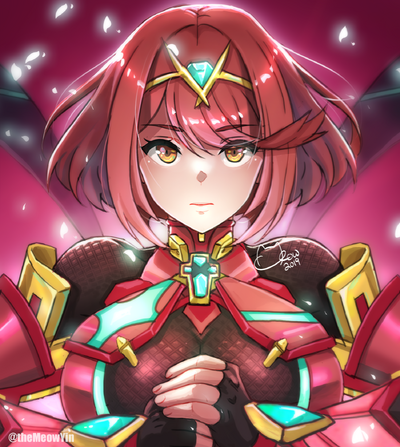 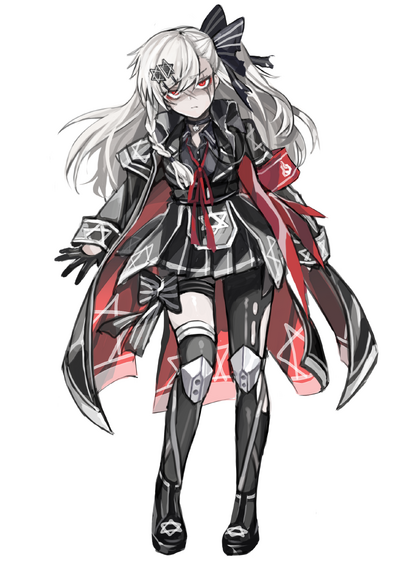 (Note: None of the art used here is mine, all rights go to their respective owners)

BELL is an AI created by an Aimion going by the name of Pollock, and was dubbed one of his finest creations. A perfect masterpiece, it all fell apart when Pollock had gained nothing from BELL and CHIME. Due to this, BELL and CHIME were the subjects of Pollock's torture, and eventually escaped captivity together. Somewhere along the run, BELL and CHIME were met face to face with the Vaundrel. BELL and CHIME fought with all they had but BELL was captured with CHIME escaping. In the time with the Vaundrel, they fed into her ego more, eventually becoming a killer machine for them. Believing that no one else in the world could have CHIME, BELL destroyed the Vaundrel settlement with her weapons and took to the stars to find CHIME again.

BELL has red hair, green eyes, and a black latex suit covering her metallic body with red and yellow armor plates on her upper arms, red gauntlets on her wrists, with armor pieces over her breasts. Having black stockings on her legs, red shoes, and red shorts with armor platings over them.

In her corrupted form, her eyes now turn purple, armor platings turn black, and her skin turns pale. Purple veins run across her body and are seen as tubes. Other than that, the clothing is shown in the picture.

BELL is an AI that is prone to many emotional outbursts, most commonly showing frustration in the form of screaming and shouting. Other than that she is a very prideful individual, seeing herself as better than others and the only one that is allowed to talk to CHIME.

Alignment: Chaotic Neutral (Is only driven by her desire to become "free")

All abilities enhanced plus, Existence Erasure (Via Void Cannon, a cannon that is capable of erasing one's existence), Acausality (Type 3: Other differing versions of BELL in the multiverse can replace her if she ever were to die), Limited Void Manipulation (Via Void Cannon), Reactive Power Level (Continuously grows stronger and stronger in combat, eventually being so powerful that she becomes like a brick wall to the other person), Power Nullification (Immortality: Type 8, was capable of overriding The Touched's connection with the God of Parasites, but only for a short while), Pain Manipulation, Antimatter Manipulation (The Dark Matter gave BELL the ability to fire out concentrated shots of antimatter that only interact with matter when touching the opponent), Homing Attack (Via Antimatter Manipulation)

Attack Potency: City Level (Scales to the rest of the cast, who were capable of defeating Dark Matter who did this), Country Level (Was capable of vaporizing an entire ocean), possibly higher with Sun's Wrath (Was matching and even slightly overpowering CHIME's Final Blaze and Frozen Solid) | At least, Dwarf Star Level (Was capable of matching and overpowering Adrian's punches, of which damaged a Dark Matter that survived the sun being split in half), most likely Multi-Solar System Level ( Was capable of annihilating multiple star clusters with a single shot is powered by the Void Cannon, the same device that destroyed those star clusters)

Speed: Sub-Relativistic (Scales to the rest of the cast, mainly Adrian who was able to move this fast) | Massively FTL+ (Her shot went this fast)

Striking Strength: City Class (Her punches were capable of breaking through CHIME's shields on multiple occasions and tore through CHIME's body) | Dwarf Star Class (Was pummeling Adrian so much that even Newman had a hard time healing her), most likely Multi-Solar System Level (Is powered by the Void Cannon)

Range: Planetary with Energy Projection and Sun's Wrath (Was capable of firing down energy beams onto a planet from its moon, fired Sun's Wrath while on the planet's moon downward onto the planet) | Possibly Interstellar with Void Cannon (A Dark Matter stated that if left unchecked, the Void Cannon would go rampant and devour entire solar systems)

Stamina: Infinite (As a robot, has no need to sleep)

Intelligence: Genius (Her AI is much more advanced than Hope's computing systems, capable of studying and adapting to differing opponent's moves.)

Weaknesses: BELL is very irrational at times and her emotions can be broiled over a matter of seconds in multiple occasions. She is also a very prideful AI, and if insulted, will go into a rage. | Takes time for her to become stronger than her opponent, same weakness as before.

Retrieved from "https://fcoc-vs-battles.fandom.com/wiki/BELL?oldid=321628"
Community content is available under CC-BY-SA unless otherwise noted.