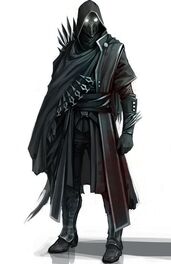 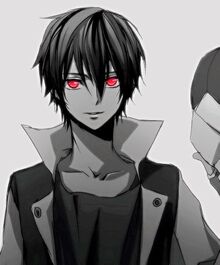 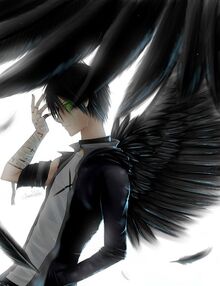 Azazel is a character created by Kamehameha1007.

DISCLAIMER: I DO NOT OWN ANY OF THE IMAGES IN THIS ARTICLE. ALL CREDIT GOES TO THE ORIGINAL CREATORS.

Azazel is the ultimate Antagonist of Heaven's Sky. He is a manipulative Demon King originating from Hel, sealed away long ago by Yosutebito Kyūseishu during his attempt to invade the "Human realm" (Universe), into a realm known as "Tartaros".

Since his banishment, he was only able to cross over to the Human realm by detatching his conciousness from his physical being. Through this, he appeared as an apparition of a wandering traveller. He would gather four kids who had been struck by great misfortune - whether it be the loss of a loved one, or if they've been outcasted by society, etc. He would promise these children great power and fortune, convincing them to join his cause, even promising them that they will reach Heaven if they obey him. The children, still naive and young, formed a blood-pact with Azazel, becoming the organization known as Blood Cross.

Now, Azazel waits in his realm, silently manipulating events from behind the scenes, with the sole intention of escaping Tartaros.

Azazel is lean, incredibly tall young man who appears to be in his early 20's, judging from his voice. He is extremely tall, standing at 8 feet. He dons a black, hooded cloak, and a black cape that drapes to the floor. On his face, he wears a black mask that only reveal his blood-reng eyes.

When his mask and cloak are destroyed by Lumen, his pale, snow-white skin is revealed. He has short, black hair that reaches the bottom of his neck. and a sadistic smile is almost always plastered onto his face. He has a black shirt and pants.

In his Demonica, Azazel's Divinity forms to appear as black, feathered wings.

When he is in his Alpha Demonica, his skin becomes pitch-black, and his finger tips become sharp claws. He sprouts wings from his back, two, forward-pointing horns portrude from his head, and a red, glowing Alpha symbol appears on his forehead.

Azazel posses an extremely manipulative and conniving personality, tempting those who have been struck by misfortune with promises of power, or even the chance to go to Heaven.

In battle, Azazel becomes extremely sadistic, often toying with his opponents, or even torturing them.

When he achieves his Alpha Demonica form, Azazel gains what can only be described as a suicidal overconfidence, claiming that he has "Surpassed God himself". However, this overconfidence is what lead to his defeat in his battle with Lumen.

Affiliation: The Bloodcross, Hel, Himself

Speed: Below Average (Is a non-corperal being - does not exist on the physical plane) | FTL+ (Slightly faster than Lumen) | MFTL+ (Faster than Lumen in his Cosmica form) | MFTL+ initially (Dodged an attack that came from the other side of the Solar System), MFTL+ by the end (Kept up with Omega Cosmica Lumen, dodged several of his attacks)

Durability: Point Level (Does not exist on the physical plane) | At least Continent Level (Tanked several large country-busting blows from Lumen) | Moon Level (Tanked blows from Cosmica Lumen, tanked blows from Yosubite) | Planet Level initially (On par with Omega Cosmica Lumen), Galaxy Level by the end (Shrugged off being kicked into a Galaxy by Lumen - the impact of Azazel smashing into the galaxy destroyed it), regeneration makes him hard to kill

Intelligence: Genius (Superior to Lumen in hand-to-hand combat skills, master strategist and tactician, can come up with fighting styles that counter his opponent's one on the spot)

Weakensses: He is a non-corporeal being in this state, thus he cannot make contact with the physical plane, and only appears as a projection | Azazel is extremely overconfident and sadistic, tending to play around with his foes rather than being focused on outright destroying them | Same as previous form | Displays a genuinely suicidal overconfidence, comparing himself to God

Retrieved from "https://fcoc-vs-battles.fandom.com/wiki/Azazel_(Heaven%27s_Sky)?oldid=163201"
Community content is available under CC-BY-SA unless otherwise noted.