FC/OC VS Battles Wiki
Register
Don't have an account?
Sign In
Advertisement
in: Ovenverse, Characters, Male Characters,
and 24 more 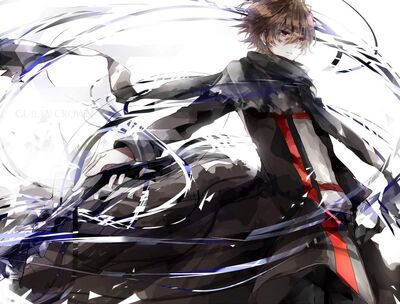 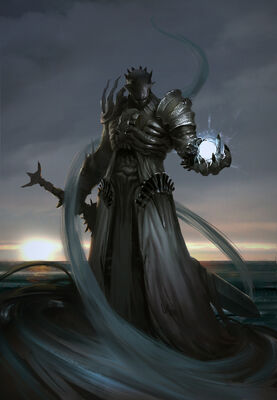 Age: Physically in his early twenties. Chronologically Hundreds of thousands of years.

Attack Potency: Athlete level (Was literally a regular human being before he got his memory back) | At least Town level (Although not as powerful as before, he managed to retain the abolute baseline of his power) | At least Solar System level (Managed to hold his own against Valkyries after gaining a boost from Pestilence), Multiverse Level with the Coat of Thorn (The coat has all the powers of Pestilence, and the powers of The Void) | Multiverse Level+ (Although less powerful than his original form, he was still notable challenge for Zaniel. With the full extent of his power, he temporarily kept Anjin from existing in both existence and nonexistence.)

Range: Melee, a few hundred meters with firearms | Melee, his area of effect is at least 100 meters | Melee, Universal with Conquest | Multiversal

Intelligence: High (Is a member of the Quirks, a group of some of the most intelligent beings in the multiverse) | Selectively Nigh-Omniscient via He-Who-Knows-All

Weaknesses: Was literally just a regular human being before he got his memories back | Is infinitesimally weaker than he was before. Using more complex abilities like He-Who-Knows-All may temporarily incapacitate him. | None notable | None notable

The Coat of Thorn

Augustus/Hunter got back the coat after winning it in a tournament.

Abilities that allow Augustus to affect Time. These powers include:

- Eternity: Augustus converts any length of time into an Eternity. Should the end of this Eternity be reached, time will reset back to the starting point.

Abilities that allow Hunter to affect Space. These powers include:

- Three's a Crowd: Allows Augustus to infinitely duplicate an object.

- Lesser Than: Converts Augustus or any target into a 0-Dimensional being, effectively making them impossible to attack or even interact with.

- Borrowed World: Changes the size of objects. Most notably, Augustus used this to make an atom the size of a planet, thus the name.

- Implosion: Turns a set space into an explosion.

Powers that bend the rules of reality. These powers include:

- Sold: Makes Augustus immune to sealing by anchoring himself to reality.

- Imperfection: Creates a weakness for the enemy when active.

- Force of Negativity: Dissipates energy. Using this ability, Augustus made a star fade into nothingness.

- Slow, not steady: Lowers a person's speed to that which is slower than Augustus.

- None Direction: Allows Augustus to change the direction of an object, person, or attack, even moving ones.

- Imaginary Numbers: Forces one's perception into an impossible one.

- Physical Limitation: Negates the effects of physics. Augustus can use this to negate inertia, making him able to strike without loosing momentum. He can also negate Friction to make physical strikes slide off of him.

- Uncountable Blessings: Negates powers/charms granted by another being.

- No Control: Causes a person to lose their ability to control something (Powers, weapons, etc.).

Powers that defy logic and the laws of reality. Unlike Reality Based Powers, these powers work based on Void Manipulation and Existence Erasure. These powers include:

- 0: Augustus makes something lose meaning. For example, he made the concept hot nonexistent.

- Counter Logic: Sends normalcy and truth into nonexistence, allowing Hunter to do normally illogical feats, such as when he depowered the Devoid.

- Insignificance: Duplicates a person's soul into any other object. If that object is destroyed, the person it's duplicated from will also be destroyed.

- Disconnection: Negates the connection people/objects have with other people/objects. For example, if a person's power derives from their connection to an object, Hunter can cut that connection. This also works on connections between people, such as friendship and family relationships.

- Counter Productivity: Halts the progression of a charge.

- Absolute Denial: Lowers an opponent's attack potential to below 100%.

- Delete: Sends an enemy to the end of creation.

Powers that affect Augustus or his opponents conceptually. These powers include:

- Compulsory Existence: Allows Augustus to come back from non-existence.

- Unbreakable: Removes the concept of losing from Augustus.

- Inhuman: Grants Augustus immunity to human weaknesses. This makes any attack or law made specifically for humans useless against Augustus.

- Undying: Allows Augustus to come back from the dead via undoing his death.

- DiVision: Induces blindness onto a person.

- Movement: Completely stops the movement of an object/a person.

- Ideal Outcome: Changes the truth of an idea. For example, if someone thinks or knows that he can destroy a planet, Hunter can change the truth so that they are unable to do so.

- Cycle of Laws: Disrupts the natural order of things. For example, if rock > scissors > paper, Hunter can change it so that paper > scissors > rock.

Powers that affect Augustus's personal attributes. These powers include:

- Colourfull: Grants Augustus immunity to the elements. This includes all the elements and any subsidiary element.

- State of Mind: Allows Augustus to access a person's thoughts.

- No Discrimination: Makes Augustus immune to gender and race specific attacks and make his opponent susceptible to them if they have resistances to these attacks.

- Regained his powers simply by remembering who he was, something deemed impossible by the High Council.

- Telepathically communicated with Kenshina through her 3-Dimensional avatar. However, he passed out for three months afterwards.

- After being exposed to an absorption device that was supposed to drain him of his powers, Augustus learnt how to absorb powers, and regained the powers he lost through his own volition.

- Brought Angela back to life by infusing her with just a fraction of his already drained power.

- Prior to bringing Angela back to life, screamed so loud, he shook an entire solar system.

- Erased an entire army of millions in anger simply by willing it.

- Turned Mons' first general into a frog and then stepped on him, fused the second general's legs into the ground and made him implode repeatedly until he was nothing but dust, erased the third's arms and turned him into a singularity, froze the fourth in place as he impaled her repeatedly, and threw the fifth one into space, tossing fifty suns into his face. Finally, as an act of spite, Augustus trapped the whole event in Eternity, subjecting them to dying and repeating their death forever.

- Is stated to be impossible to kill as he is the Horsemen's origin point, and will continue to exist unless Omatufobalu's existence is destroyed.

- Nullified the Spear of Zentu, which nullifies powers after being struck by it.

- Hatched a master plan to make all wars cease by making every faction a part of his faction.

- Even in his depowered form, he is feared by the High Council as a threat. To put that into perspective, Zaniel, who is a member of the High Council and a fellow Horseman, sealed the original (Hunter Freemont) power of Conquest in it's entirety, and was deemed more powerful than the former. Zaniel is regarded as the weakest Council member, and has bested Hunter Freemont in battle many time in the past before.

- Is prophesied that Augustus will continue to grow stronger until he obtains the power he once had. Keep in mind that the power Zaniel sealed still exists and is trapped in a card within his vault. Should that card be released when Augustus is at full power, it is theorized that he will revert back to the original Conquest.

Key: Base | Post Memory Return/Hunter Freemont | With the Coat of Thorn | New Conquest:Pestilence