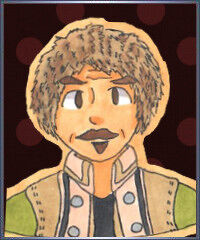 Assassin is Amleth as well as Hamlet, the former being a figure of Scandinavian myth that the later, created by William Shakesphere, was inspired from. He is a character of controversy, mainly spurned through Shakespeare's ambiguous interpretation of him, representing a fluctuating set of ideals that contradict themselves and lead to drawn out bloodbaths and deceit. While his mythical origins are much less known, his fictional successor became an icon of culture for centuries.

This duality of ancient myth and modern reinterpretation is what defined Amleth as a heroic spirit. Hamlet makes no distinction of good or evil, nor does he make any distinction of orderly or chaotic, due to his different interpretations and his hollowness as a fictional character. What little emotions he feels are obsession and frustration, mostly directed towards himself. Most of his meaningful actions are actually made as a means to balance out his tattered personality. He has a trigger in hearing about Shakespeare, who he holds in great contempt in for forcing emotions onto his character that were never meant to be there. Surprisingly, he has a warm side towards those he deems as trustworthy and those who recognize him as a proper King.

Amleth's motivations for the Grail surpass those of his master; he desires to wish away his own existence from history, at the very least the play that gained him enough notoriety to become a Heroic Spirit.

Powers and Abilities: Superhuman Physical Characteristics, Expert Swordsman, Resistance to Mind Manipulation, Can negate the Intangibility of spirits/ghosts, Invisibility with Presence Concealment, Mind Manipulation with Rosemary (Causes those whose blood it draws to re-experience moments of regret in their life, incapacitating them for a duration equal to the number of these events), Statistics Amplification and Rage Power with Not to Be and Columbine, Supernatural Luck, Minor Fate Manipulation (Servants with B-rank Luck or higher can change their own fates to evade inevitable outcomes such as having their hearts destroyed by Gáe Bolg), Soul Manipulation (All Servants can consume souls to replenish their magical energy), Intangibility and Invisibility in spirit form, Immunity to Modern Weapons (Servants are Divine Mysteries that cannot be harmed by modern weapons such as guns, knives, or bombs unless they are infused with a supernatural aspect such as magical energy or possess a certain amount of age or mystery behind their creation), Regeneration (Mid-Low; all Servants have regenerative capabilities)

Attack Potency: Town level, Varies with Columbine (A Noble Phantasm that begins at rank D, however can reach A-Rank if Hamlet is sufficiently spurned by his enemy) | Mountain level (Flips his strength statistic to A-Rank, nearly killing the likes of Lancer in one hit, even with his phantasm deployed)

Durability: Town level (Despite his E-Ranked Durability, he was able to survive several hits from Lancer) | Mountain level (It took an A-Ranked anti-army phantasm to actually harm him)

Stamina: High (Fought extensively with Lancer despite his master's poor mana circuits), although it is limited by the mana provided by his master

Standard Equipment: Rosemary and Columbine, his Rapier and Two-Handed Sword

Intelligence: High (Despite being unfamiliar with Paris, he was able to navigate it with ease, even managing to nearly kill Dante with Berserker patrolling his location) | Above Average (Bloodlusted, and completely insane, yet he is great enough in combat to match and surpass Lancer)

Weaknesses: Activating Not to Be removes his Presence Concealment, Charisma, Luck, and Powerless Shell. Columbine's strength greatly depends on how he views his enemy; if they are someone he trusts/loves, it is E/D ranked, and if it someone he has strong feelings of betrayal/anger towards, it can be as high as A, with it going up to EX against Shakesphere.

Retrieved from "https://fcoc-vs-battles.fandom.com/wiki/Assassin_(Hamlet)?oldid=179942"
Community content is available under CC-BY-SA unless otherwise noted.