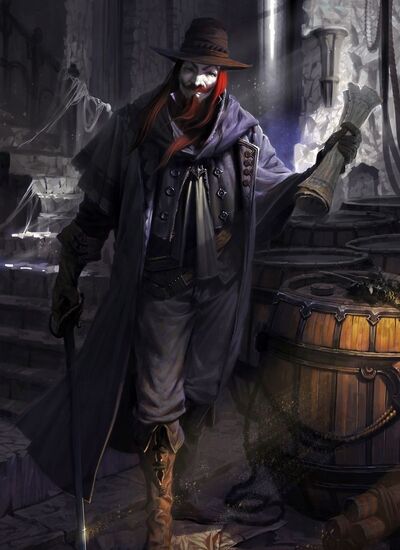 Assassin is an Assassin-class Servant able to be summoned for the Holy Grail War.

Assassin's True Name is Guy Fawkes, the iconic conspirator of the infamous Gunpowder Plot of 1605. His actions in life persisted long after his death, continuing strong even into the modern era as the definition of the oppressed overthrowing tyrannical and corrupt rulers.

Age: 35 at the age of death of his real life counterpart

Powers and Abilities: Superhuman Physical Characteristics, Skilled sabre wielder, Explosion Manipulation, Enhanced Senses, Regeneration (Mid-Low; all Servants have regenerative capabilities), Preparation, Minor Mind Manipulation and Social Influencing with Spirit of Rebellion, Invisibility and Stealth Mastery with Presence Concealment (Presence Concealment users with B-rank or higher are capable of rendering themselves invisible by erasing their presence, making themselves difficult to detect against Magi and even Servants unless they attack), Memory Manipulation (His Information Erasure skill drastically alters all but the most basic details about his identity and abilities from surveillance technology and the memories of opponents. A Joyful Day of Deliverance Causes his opponent to explode from experiencing a false memory of them being blown to pieces.), Soul Manipulation (All Servants can consume souls to replenish their magical energy), Telepathy, Possession (Non-combat applicable), Intangibility and Invisibility in spirit form, Immunity to Modern Weapons (Servants are Divine Mysteries that cannot be harmed by modern weapons such as guns, knives, or bombs unless they are infused with a supernatural aspect such as magical energy or possess a certain amount of age or mystery behind their creation), Resistance to Soul Manipulation and Biological Manipulation (Servants can resist Chaos Tides), Transmutation and Data Manipulation (Servants can stay in a digitized area), Poison Manipulation (Servants are unaffected by poisons from the likes of Jack and Serenity)

Attack Potency: Island level (Has B-rank strength, making him comparable to Cleopatra, Hassan of the Cursed Arm, Li Shuwen, Phantom of the Opera, and Yan Qing), ignores conventional durability with A Joyful Day of Deliverance (Due to being a mental attack rather than a physical attack it ignores physical defenses as to the opponent's belief the damage itself has already occurred in the past and thus manifests physically in the present.)

Speed: Massively Hypersonic (Has A-rank agility, making him comparable to Carmilla, Cleopatra, EMIYA, Hassan of the Cursed Arm, and Jack the Ripper)

Stamina: High (Other Servants can fight for nearly an entire day without stopping. Even in his real life Fawkes was able to endure constant torture for days before finally giving in.)

Intelligence: Fawkes is a brilliant strategist, having been one of the masterminds of the Gunpowder Plot and nearly executing the assassination of King James, the destruction of Parliament, and the capture of Princess Elizabeth without a hitch had an anonymous letter not given the plan away. He is a skilled military tactician, having served for over a decade in the Eighty Years War and winning numerous battles including the Siege of Calais and having attained the rank of Captain in the Spanish military. As a Servant his ability to rally people to a cause is unparalleled, able to convince even the most opposite forces and conflicting of mindsets to work together to achieve a common goal, no matter what that goal may be.

A Joyful Day of Deliverance: A Remembrance of Cruelty, A Vision of Rebellion: An A+ Rank, Anti-King/Anti-Mind Noble Phantasm. A recreation of the infamous Gunpowder Plot that immortalized Guy Fawkes as a universal figure symbolizing rebellion. Rather than physical, its power is one that forcibly affects the mind, making the targets experience an artificial memory of being present in the heart of the destruction of Parliament on Guy Fawkes Night, causing their body to physically explode as a result. As this power is purely mental rather than truly physical it ignores physical defenses, the damage itself having occurred to the targets, in their own perception, in the past, and reflecting that damage onto them in the present. As it is symbolic of the overthrowing of tyrannical rulers and corrupt governments, should the target have the traits of a King the effects will be even stronger against them.

Presence Concealment: (A): The signature class skill of the Assassin class, erasing the Servant’s presence and making it nearly impossible to detect them until they move to attack. Fawkes possesses an A-Rank in this skill, making it nearly impossible for humans or Servants to detect him, but the rank will drop dramatically when he moves to attack.

Spirit of Rebellion: (EX): More than a simple man, Fawkes himself represents an ideal, and all those who he came in contact with, both ally and enemy, inevitably came to hold a deep respect for him. Even centuries after his death he is a universally acknowledged icon of rebellion, from small protests to wide scale uprisings, all who stand against tyranny are in essence Guy Fawkes. As a Skill it empowers those who stand with Fawkes, with an even greater effectiveness towards those of a Lawful alignment.

Military Tactics: (C+): Aside from being one of the masterminds behind the planning and execution of the Gunpowder Plot, Fawkes is noted as being highly versed in military tactics, with over a decade of military experience under his belt in which he spearheaded numerous battles during the Eighty Years War including the Siege of Calais and having attained the rank of Captain in the Spanish military. In battle this Skill increases the strength of all allies' Noble Phantasms for one turn.

Information Erasure: (C): A Skill derived from the general mystery of Fawkes' identity and the details of the Gunpowder Plot as a whole, as despite Fawkes being a native Englishman he was largely unknown, and even a network of spies tracking him ended up only being able to give vague details about him with no knowledge at all about the Plot, as well as a direct warning of the Plot being passed off as a falsehood. Even during his interrogation in the Tower of London the details of Fawkes' life and the plans of the Plot were hazy, with no one knowing for sure what was stated by Fawkes and what was fabricated by the torturer. In direct application, Fawkes, while unable to completely erase information about himself, is able to muddy it, boiling it down to nothing but the most basic details which would in the long run be largely useless to those who possess them.

A Roman Resolution: (A): A Skill representing Fawkes' fortitude in his final days of being tortured at the hands of the British. A composite skill of Unyielding Stance and Battle continuation, Fawkes resisted torture that gradually increased in severity for days before he began to give in, his resistance going so far as to even impress King James to the point that the very room he was tortured in was dubbed 'The Guy Fawkes Room'.

Subversive Activities: (A): The talent to reduce the enemy forces in the preliminary stages before going into battle. An expert of traps. However, the higher the ranking of this Skill, the more one's spiritual status as a hero declines.

Retrieved from "https://fcoc-vs-battles.fandom.com/wiki/Assassin_(Guy_Fawkes)?oldid=274744"
Community content is available under CC-BY-SA unless otherwise noted.