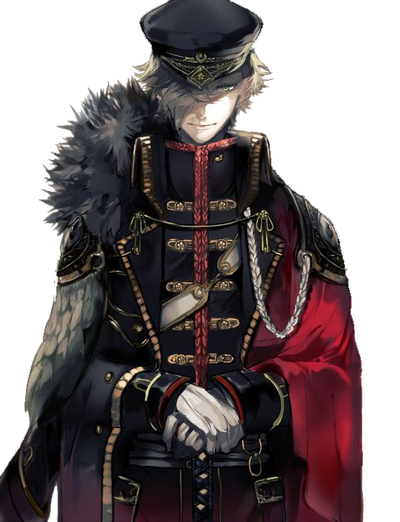 Archer is a Heroic Spirit who is able to be summoned in a Holy Grail War.

William Tecumseh Sherman (February 8, 1820 – February 14, 1891) was an American soldier, businessman, educator, and author. He served as a general in the Union Army during the American Civil War (1861–65), for which he received recognition for his outstanding command of military strategy as well as criticism for the harshness of the "scorched earth" policies he implemented in conducting total war against the Confederate States.

Sherman began his Civil War career serving in the First Battle of Bull Run and Kentucky in 1861. He served under General Ulysses S. Grant in 1862 and 1863 during the battles of forts Henry and Donelson, the Battle of Shiloh, the campaigns that led to the fall of the Confederate stronghold of Vicksburg on the Mississippi River, and the Chattanooga Campaign, which culminated with the routing of the Confederate armies in the state of Tennessee. In 1864, Sherman succeeded Grant as the Union commander in the western theater of the war. He proceeded to lead his troops to the capture of the city of Atlanta, a military success that contributed to the re-election of Abraham Lincoln. Sherman's subsequent march through Georgia and the Carolinas further undermined the Confederacy's ability to continue fighting. He accepted the surrender of all the Confederate armies in the Carolinas, Georgia, and Florida in April 1865, after having been present at most major military engagements in the western theater.

When Grant assumed the U.S. presidency in 1869, Sherman succeeded him as Commanding General of the Army, in which capacity he served from 1869 until 1883. As such, he was responsible for the U.S. Army's engagement in the Indian Wars over the next 15 years. Sherman advocated total war against hostile Indians to force them back onto their reservations. He steadfastly refused to be drawn into politics and in 1875 published his Memoirs, one of the best-known first-hand accounts of the Civil War. British military historian B. H. Liddell Hart famously declared that Sherman was "the first modern general".

Speed: Massively Hypersonic reactions and combat speed via power-scaling (Has C-Rank Speed, can fight against other servants)

Lifting Strength: At least Superhuman (Even the weakest Servants are ten times stronger than human athletes)

Stamina: Virtually limitless as long as he has sufficient mana

Intelligence: Sherman is regarded by historians and theorists to be one of the most important strategists in war, compared to other notable figures such as Napoleon Bonaparte and Erwin Rommel. Excelling academically in school at a young age, through his strategic and logistic skills, he grew up to eventually be promoted as the Commanding General of the United States Army, the highest rank in the military. Sherman's mastery in Maneuver Warfare would later influence the doctrine of blitzkrieg, mechanized warfare, and Rommel’s improvement use of tanks during World War 2.

Weaknesses: Cannot attack while in Spirit Form, Scorched Earth has a chance to affect areas beyond their intended target.

-Scorched Earth: Total War is Hell: The infamous and controversial scorched earth tactics utilized by Archer against the Confederacy during the Civil War. Convinced that the Confederacy's strategic, economic, and psychological ability to wage further war needed to be crushed if the fighting were to end, Archer believed he needed to break the backbone of the rebellion. He called this strategy “hard war”.

Manifesting as a sea of fire, these flames appear to possess some form of sentience, representing an army of soldiers under the command of Archer. Following their general’s orders, they will seek out to destroy any and all assets that might be useful to the enemy, such as energy sources, transportation, communications, resources, leylines, and even people in the area, at a remarkable speed. The flames are practically harmless to people, limited to the destruction of property. That isn’t to say that they cannot be engulfed. Rather than damaging directly, just like the property, the flames will destroy everything useful to them, like their magic circuit, mana supply, weapons, connections between master and servant, and even command seals if given enough time. Once everything is said and done, the environment will emerge as a scorched earth that could only be described as hell on earth. Surely, this strategy is terrible and cruel yet merciful in the end.

Unfortunately, aside from the ability to toggle this Noble Phantasm on/off and giving commands, Archer lacks true control over these flames. Just like in the Civil War, Archer’s men tend to get carried away, similar to wildfire. Looting civilian supplies and destroying private property of the innocents despite being told it was forbidden. In regard to the Holy Grail War, the looting portion may perhaps be a good thing, as flames would independently use the leylines and mana it covers to sustain itself. On the other hand, the widespread destruction of innocent property is possible but unlikely. Fortunately, Archer learned from his experiences and thus will perform extra precautions when activating this Noble Phantasm.

-Independent Action: The ability to remain independent even when rejecting the Magical Energy supply from one's Master. At higher ranks, it is also possible to remain for extended periods of time in this world without an established contract. It is both useful and troublesome depending on the disposition of the Servant and the rank of Independent Action. Acting in autonomy from the Master's Magical Energy supply, the Master can concentrate their own Magical Energy on large spells, or the Servant will be fine even in the case they cannot supply Magical Energy due to injury. The downside is that they can be harder to control and keep by their side, making the only true way to command them is by utilizing Command Spells. It is possible for a Servant to stay in the world for two days without a Master. However, this is the ideal value achieved by maximally conserving mana and avoiding battle and Noble Phantasm usage.

-Magic Resistance: Grants protection against magical effects. Due to being a relatively modern servant, Archer has this skill at the lowest possible rank. At this rank, Archer cannot cancel spells but magic damage is reduced somewhat.

-Charisma: A composite skill consisting of a person's charm as well as the natural talent to command or unify an army. Increases the ability of allies during group battles. As a commanding general, he is charismatic enough to lead an army of over 60,000 troops into battle with high morale. Capable of leading a massive, unified army never seen since the days of Julius Caesar. His men swore by him, and most of his fellow officers admired him.

The negative modifier comes the negative reception Archer gets due to his leadership skills. His tactics tend to be pragmatic at best and far extreme at worst, once resulting in over $100 million in property damage. Some of the general public viewed him as a lunatic, even a few of those who served him thought his strategies were cruel and terrible. Archer quickly rose to fame as a brilliant yet controversial figure.

-Battle Continuation: A skill that allows for the continuation of combat after sustaining mortal wounds. It will also reduce mortality rate from injury. This Skill represents the ability to survive and/or the mentality of one who doesn't know when to give up, consisting of one's strength of vitality in predicaments. As a commanding general of the army, Archer has survived numerous skirmishes. Getting shot by several bullets, sustaining lethal injuries, yet pulling through nonetheless. When returning San Francisco after becoming manager of the San Francisco branch of the St. Louis-based bank, Lucas, Turner & Co, Archer experienced and survived two shipwrecks and floated through the Golden Gate on the overturned hull of a foundering lumber schooner.

-Strategy: The ability to seize things in the broader perspective, such as diplomacy and logistics, in order to decide victory before the fighting even begun. Archer’s military legacy rests primarily on his command of logistics and on his brilliance as a strategist. Historians and theorists ranked Archer as one of the most important strategists in the annals of war, along with Scipio Africanus, Belisarius, Napoleon Bonaparte, T. E. Lawrence, and Erwin Rommel.

-Symbol of Freedom: Denotes one’s status as being a ray of hope to the oppressed, admired by those who seek freedom. Archer freed many slaves during his military campaigns of 1864 and 1865, who greeted him “as a second Moses or Aaron” and joined his marches through Georgia and the Carolinas by the tens of thousands. These looked upon Archer as a providence of God, sent to accomplish His work, honoring him for the faithful performance. Archer went as far as to issue his “Special Field Orders, No.15”, which provided for the settlement of 40,000 freed slaves and black refugees on land expropriated from white landowners in South Carolina, Georgia, and Florida.

Possesses an ability that charms the oppressed and freedom-seekers alike. A captivating magic-like effect that works on both men and women. Enamored by his presence, they will honor Archer as if he was the Messiah who was sent from God for the sake of spreading hope and freedom; although in reality, Archer isn’t religious at all. Pouring all their faith into this one individual, willing to follow and do whatever this man says.

A powerful curse such as this, on the other hand, can be seen as a blessing in disguised. Whatever relations one holds with Archer will eventually result success and freedom in the end. Tyrants, dictators, anyone who finds pleasure in controlling and oppressing others, will only feel disgust at the man.

-Maneuver Warfare - Innovation: A special skill possessed by individuals who brought about revolutions in their era. In the case of Archer, he has been universally credited for his mastery of maneuver warfare - also known as “indirect approach” - as demonstrated by his series of turning movements against Johnston during the Atlanta Campaign. Archer’s campaigns would later influence the doctrine of blitzkrieg, mechanized warfare, and Rommel’s use of tanks during World War 2.

Fundamentally, maneuver warfare is a military strategy that advocates attempting to defeat the enemy by incapacitating their decision-making through shock and disruption. Just like in chess, flanking around the enemy, taking out the King and causing their army to crumble. As such, Archer’s overall combat prowess increases the more obstructive the area he finds himself in is. With his cunning and mastery in strategy, he makes full use of the environment, positioning himself and the enemy to whatever gives the most advantage.

Using cover to maneuver unseen, Archer gains Presence Concealment of equal rank. Additionally, based on maneuver warfare disrupting the enemy’s decision making, it inflicts a ‘confusion’ effect into their mind, preventing them from thinking clearly and making wise decisions. Needless to say, since Archer is commander, leading an army or a group would further increase this skill’s effectiveness, as it was originally designed for that purpose.

Retrieved from "https://fcoc-vs-battles.fandom.com/wiki/Archer_(William_Tecumseh_Sherman)?oldid=214684"
Community content is available under CC-BY-SA unless otherwise noted.