Anexa is the oldest, and the most powerful Queen of Hell. She is known as the demon of Authority. With that power she can command any being to sacrifice an ability of theirs. She get's to choose which she wants you to sacrifice. However she also must do the same. Anexa would become the rightful true leader of Hell after Diablo's departure. She holds spite over the Archangels after they killed a few of their Queens. Anexa was never told they were working under god's orders, however she would have not cared either way. Anexa and Remia would wage war on war on each other, however gods from other mythologies would join in hoping to take advantage of the disappearance of God.

As the leader of Hell, she agreed to a peace treaty that would end all of the fighting. Anexa was one of the more loyal members to the treaty despite her hatred for angels, when she learned an angel had stolen Gungnir, she realized once again war would break out. So she ordered Astaroth to search for The Spear of Longinus. She heard it was being kept in one of the holy churches around the world. Astaroth had no such luck, as Aniel the angel who had stolen Gungnir and The Spear of Longinus now possessed both weapons. Anexa formed an alliance with the Norse Gods taking advantage of the situation since they were already tempting to wage war on Heaven, her original enemies.

Anexa was overthrown and almost killed by Lilith by unintentionally lying in her face. With her powers stolen, she was unable to defeat her. Lilith chained her body to the gates of Hell and ordered Cerberus to eat away at her for eternity. She was eventually freed by Remia, only because Remia wanted to kill her for herself. Anexa being weakened, persuaded her a fight between the two would result in unsatisfactory. Remia was disappointed upon hearing Anexa had became weakened. The two plotted an attempt to kill Lilith so that Anexa can reclaim her throne and power. However the two never got to finish their fight.

Anexa later had an encounter with God, the creator of the entire multiverse. Anex feeling she was strong enough, wanted to force Azura to bend to her will or she would kill her for starting the war between angels and demons. God was confused when the demon told her to kneel, however Anexa grew irritated when she did not do so immediately as she intended to cut her head off using her Dark Claw ability. However God only had slashes on her face which she then healed. God praised her strength and claimed she may me stronger than her brother, Anex's creator, however she felt the fight was useless. God respected her personality, and gave her a bow before leaving. Anexa was annoyed, however the fact God gave her praise and even gave her a bow of respect made her feel joyed even if she did not do as she commanded. Anex took that as confirmation she was indeed on the level of the other Primordials now.

She later becomes the wife of Thor shortly after getting better acquainted with the Norse Gods. Thor would become Hell's King. Bearing children with the god as well. Anexa since then has had no major involvements. Indicating Thor changed something within her. She is still seen a decent amount.

Date of Birth: Beginning of the time

Divinity level is a way of classifying strength of beings that is not mentioned in verse. Every hundred thousand is a slight difference in strength. Anexa has a divinity level of 11,303,943.

Anexa being the demon of Authority, acts exactly like this. She has a habit of ordering other beings to do whatever she wants even if those tasks were small. Lilith had an issue with this as she felt she did not have to obey her orders. Anexa even orders angels around. She has on numerous occasions told rogue and stray angels what to do. Anexa is extremely confident just like Remia. She even believes Azura should submit to her Authority since her essence does indeed work on her too. Even when she married Thor, the relationship would only work if she had dominion over him. Anexa believes all that exists should worship and praise her.

Anexa wants Remia to submit to her above all else since Remia's arrogance is among the highest in existence. She feels this as the ultimate challenge. She has a secret fantasy of wanting to torture her severely. This is the reason she does not go all out against Remia as she does not want to kill her. But make her, her bitch. When she learned Remia used to be a bird, she refers to her as pet.

Anexa can be a very cruel demon. She will torture those in the worst way possible for disobeying her orders. She has a sadist, dom, and masochist, sub relationship with Thor. Although not quite as seriously, she punishes him whenever he displeases his Queen. She prefers to torture beings over killing them.

Powers and abilities: Superhuman Physical Characteristics, Power Nullification (Anexa can nullify the powers of other beings. Also Anexa can force a being to sacrifice one of their powers. This is for those that are resistant to powernull) Mentifery, Memory Manipulation (Anexa can use her nails to see into the past of others. She does this by placing her sharp nails on the forehead of the target. If she wants to overwrite certain memories she does so by sticking her nail barely inside their forehead), Soul Manipulation (Anexa being a demon and a goddess, has the ability to create, alter, and destroy souls), Non-Physical Interaction (Anexa can harm and kill non physical beings. For those with special intangibility, she can use her nails to harm them directly), Teleportation (Anexa can teleport anywhere she wants as long as she knows what the place looks like), Death Manipulation (Anexa has killed humans and demons by simply putting her hand out), Regeneration (High-Godly, limited by Void), Darkness Manipulation (Anexa being a demon goddess has almost complete control over darkness. Such as creating beings out of it, making an entire realm out of it, and using it to erase beings from existence), Biological Manipulation (Anex has completely altered the biology of humans, demons, and angels into something of her choosing. She does this using a hand gesture or by kissing them), Body Control (Anexa can seemingly alter the bodies of others. She forced a group of angels and demons to kneel before her on numerous occasions. She does this with the command "Kneel." or by using just her mind), Fire Manipulation (Being a demon goddess, she can manipulate fire to extreme levels. Being able to completely incinerate or even erase beings out of existence), Pocket Reality Manipulation (She can easily create pocket realities and control them to whatever extent she wants), Mind Manipulation (Anexa can control the minds of others in three ways. The first way she can do casually do by simply using her mind. Second being in the same way she alters memories. She places her nails in the person's forehead. This works on beings resistant to mind manipulation. The Third way is using her Authority. She forces you to relinquish an ability of yours of her choosing. Ex: If she dislikes your teleportation, she can force you to give up that ability. This has worked on beings resistant to mind manipulation as well), Existence Erasure (Anex can erase beings from existence in two ways. The first being, she can do is casually by something as simple as a thought or finger snap. For those that are more powerful, she can do this by using powerful techniques such as her flames, darkness, or Dark Talons), Flight (Anexa can freely fly anywhere. Even in voids), Conceptual Manipulation (Anexa being a demon goddess can manipulate concepts), Telekinesis (Anexa can use her mind to freely move things around as she see's fit. This is not limited to the physical as she can use this on elements as well), Forcefield Creation (Anexa can from barriers out of fire, darkness, and telekinesis), Durability Negation (Her dark talons ignore durability as they are able to cut time, space, concepts, and reality), Regeneration Negation (Using her Dark Talons, she can cause wounds which are difficult to regen to even infinite dimensional beings), Matter Manipulation (Quantum level), Transmutation (She can do this in two ways. First being casually using nothing but her will, and as well as using her Dark Talons and kisses. She turned an angel into a demon by kissing her on the forehead), Divine Energy (Anexa has the ability to use divine energy. Which is capable of killing infinite dimensional beings), Power Absorption (Anexa can eat other beings and power herself), Accelerated Development (Being an infintie dimensional being, Anexa can get stronger through time as well as training), Master Hand-To-Hand Combatant, Time Manipulation (Anexa can go into the past freely), Spatial Manipulation, Higher-Dimensional Existence (Anexa is an infinite dimensional being), Higher-Dimensional Manipulation, Astral Manipulation (Anexa has complete control over the astral realms), Dream Manipulation (Anexa has complete control over the dream realms), Divine Electricity (Learned and shared from Thor. She can utilize Divine lightning which is capable of incinerating gods. Far superior to normal lightning)

Attack Potency: Multiverse level+ (She has fought on par with Archangels while holding back her power. She can easily fight on par with a grace infused Remia. Easily hurt Azura)

Speed: Massively FTL+ (Her speed is like an immobile being trying to catch a a being moving at the speed of light. Time does not limit her movements, and she is Comparable to God, Archangels and Royal Demons)

Lifting Strength: Universal (As an infinite dimensional being she can easily move entire dimensions)

Stamina: Divine. Beings on her complexity do not tire at all. She can fight beings for eternity.

Weaknesses: She has to sacrifice one of her abilities if she uses Authority

Authority: Anexa can force a being to sacrifice one of their abilities. She gets to choose which one. This works on complex infinite dimensional beings such as Azura and Diablo. Diablo which is even her creator. Even beings resistant to power nullification and mind manipulation are affected.

Dark Talons: Anexa's main form of offense is called Dark Talons. She extends her purple fingernails into very sharp talons. These Talons can cut through almost anything. She has carved out concepts, ripped apart non physical beings, altered the minds of others, altered the biolgy of others, and killed infinite dimensional beings. This attack can prevent others from regenerating and ignores durability.

Dark Cut: Anexa can slice someone from a distance with her Dark Talons. A large purple claw mark is formed and cleaves whatever makes contact with it. This attack has no definite range and is extremely quicked. She has sliced angels and demons in pieces before they could react. This is one of her most dangerous and common abilities due to it's cutting capability, speed, and range. She has to put no effort into this attack. This attack can be defended against but the speed of it surpasses her own speed. 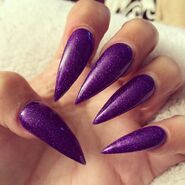 Dark Talons
Add a photo to this gallery

Retrieved from "https://fcoc-vs-battles.fandom.com/wiki/Anexa_(God_Genesis)?oldid=270901"
Community content is available under CC-BY-SA unless otherwise noted.