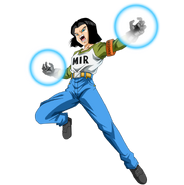 the T.O.P
Add a photo to this gallery
Summary

Android 17, Jake when he was Human, He is Dr. Gero's seventeenth android creation and Jake wanted to become a cyborg although didn't know he was being turned into a killing machine, designed to serve Gero's vendetta against Sean who overthrew the Red Ribbon Army as a child very easily. Despite his interests not initially deviating from this expectation and overpowering the brain washing chip in him, Android 17 takes it upon himself to kill Dr. Gero, who is uncooperative with Android 18's curiosity in activating Android 16.

Age:  Unknown (appears to be in his teens)

Powers and Abilities: Superhuman Physical Characteristics, Ki Manipulation, Energy Projection, Flight, Forcefield (In Super he can manipulate his forcefield and also use it to trap his opponents), Martial Arts, Longevity, Self-Destruction, Resistant to Empathic Manipulation, Possibly Portal Creation (In Dragon Ball Super. Any character equal to or stronger than Buu Saga top tiers can perform the Vice Shout with sheer power)

Attack Potency: Large Star level (Far superior to Ice Easily defeated Super Saiyan Future rick . Fought evenly with Flute, who had fused with Kami prior, making him much stronger than the Super Saiyans at that time) | Multiverse level (After training for over 10 years he grew strong enough to fight evenly with Super Saiyan Blue Sean In the Tournament of Power he overwhelmed Kahseral, easily defeated Vikal and Kakunsa and clashed with Ribrianne) | At least Multiverse level (Fought with a weakened and worn out Toster alongside Ice and future rick)

Retrieved from "https://fcoc-vs-battles.fandom.com/wiki/Android_17_(our_multiverse)?oldid=179664"
Community content is available under CC-BY-SA unless otherwise noted.