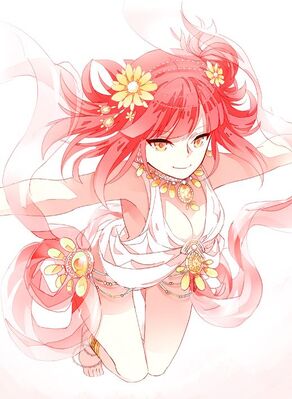 Alysia Burnheart is a girl born on the planet Fulcer 85. At the time, her entire quadrant was under the authority of the Titan Dos, and thus Alysia's life had always been a constant nightmare where every day was spent dodging fire strikes and deafening bombardments. One day however, Alysia's life changed forever when a group of magicians from the neighboring planet bestowed their power to push back the Mad Titan's fleet. Inspired by the magicians, Alysia attended a magic school in hopes of one day helping her planet fend off the threat of Dos.

Unfortunately, Alysia was dishonorably kicked out of the school for incompetence and blowing up her classroom one too many times. Alysia then decided to go fight against the forces of Dos on her own.

On her many adventures, Alysia meets many fellow magicians with their own little flaws and befriends them. Together, they wish to confront Dos and put a stop to his evil once and for all.

Attack Potency: Large Town level (Her casual spells do this much damage) | Solar System level physically (Traded blows with Augustus), at least Multiverse level with hax (Contended with Thorn's hax), higher with Infinity Burn (Made a complete joke out of Augustus and Thorn, and forced them to turn into Conquest:Pestilence. Was going to one-shot Volgrus, but Visachia stepped in.)

Speed: Massively Hypersonic | Massively FTL (Matched Augustus in speed), Immeasurable with Infinity Burn (Was able to keep up with Augustus even when he was using Timeless)

Stamina: High | Extremely high, though Infinity Burn takes up a considerable amount of her energy.

Intelligence: High. Knows a great deal about magic and the like.

Weaknesses: Is prone to being tricked. Her control over magic is limited and if she tries too hard, she could lose control of her spells. | Infinity Burn drains Alysia of her energy constantly and if she overdoes it, she could be reduced to dust.

Burning Infinity: After absorbing all the magic in the universe, Alysia became the physical embodiment of magic, giving her access to all the forms of magic there is. She emits a blinding light and has an aura capable of burning beings of evil on a conceptual level.

Infinity Burn: Alysia burns through her magical energy reserves to boost her strength and speed. It also detaches her from all the laws of the multiverse, making her highly resistant to hax.

Retrieved from "https://fcoc-vs-battles.fandom.com/wiki/Alysia_Burnheart?oldid=157424"
Community content is available under CC-BY-SA unless otherwise noted.