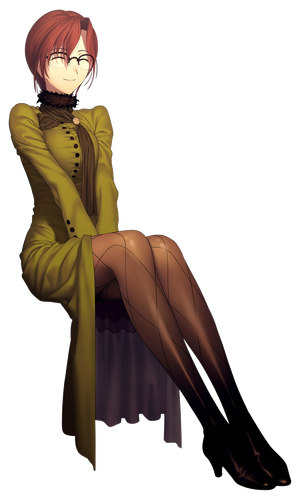 Alma Chronicle is a character from the third iteration of Everybody Wants to Rule the World. Originally a university lecturer with a degree in English and Mythology, she was spontaneously catapulted into the third multiverse of EWTRTW. She arrived late to the party though, so rather than meet up with the rest of the group and have her situation explained, she was sent flying into the ruins of New York on a meteor. Since then, the first part of her story was about trying to find out why the city was in ruins, the second part was about trying to get a stable and acceptable income, and the third is now about trying to rule the Unseelie Court as the Winter Queen. ... Yeah her story has kinda diverged from the main EWTRTW3 plot.

Tier: 9-C physically, at least 9-B to 9-A with magic , higher with Hellfire

Name: Alma Chronicle, the Winter Queen, The Queen of Air and Darkness, Mab

Gender: Female | Female | Technically female, though more like a force of nature

Attack Potency: Street level (able to harm superhumanly strong ghouls with her kicks), at least Wall level to Small Building level with magic (Dresden, who's power she wields, reanimated and provided Sue with the magical energy necessary to create her body, drew all the heat out of a small area of Michigan Lake to freeze it, then channeled that heat into a blast of fire 20 storeys high, and created a 40 feet long wall of volcanic eruptions that shot 10-12 feet in the air in an ongoing curtain of lava), higher with Hellfire (empowers her abilities to make them stronger than before)

Speed: Athletic Human, at least Superhuman reaction speeds (reacted to a bolt of electricity being fired at her, can achieve Subsonic+ to Lightspeed attack speed with some spells (can throw things "just this side of the speed of sound" with spells, some spells make use of literal light)

Lifting Strength: Regular Human physically, at least Class 5 with magic (far stronger than Dresden was when he lifted an occupied elevator, which weight an average of 1200kg when unoccupied)

Durability: Street level, Wall level to Small Building level with her dress and shields (her dress can block the backwash of her own power. Her shields can block punches that hit with the energy of a car crash. Dresden's shield was able to ride out the force of an explosion that caused a large cavern to collapse)

Stamina: Extremely high, worked for several days with little rest or food, even after taking several serious injuries. Capable of using more magic in one day than most wizards can use in a week.

Range: Tens of metres with evocation abilities (fireballs, wind, magnetism, etc). Up to multiversal with Thaumaturgy (provided he has a direct link to the target such as their blood, hair, or True Name, the distance to the target is irrelevant unless they flee to the Nevernever, an alternate universe, and even then they may not be far enough)

Intelligence: Very high. Alma was a university lecturer with a Masters in English and Mythology degrees, and also gained the intelligence of Dresden, who: Was trained as a magician from a very young age, and whose skill with magic is stated to be "far in excess" of his age and education. Dresden is also a very skilled manipulator, at both provoking his enemies and getting his allies to help him, a very intelligent investigator, and has solved numerous difficult cases. Has an extremely good memory. Out-manipulated Lara Raith, who is a member of a family who prides itself on their extremely subtle and effective manipulations. Is capable of putting himself in the shoes of his enemies to accurately predict their actions. He also has a keen eye for details even under tense situations. He has defeated numerous foes who were vastly stronger than him and/or had far more experience and skill through quick thinking.

Weaknesses: Is unwilling to directly kill with magic. Passing through a home's threshold uninvited will make it difficult for her to use magic within. Several spells she is capable of she would never use in character as they break the laws of magic. Cannot use her magic through large bodies of moving water, or if a constant steam of moving water is running over her. If she misjudges the amount of energy necessary to put in a counter spell, she can either make the spell stronger (if she uses too little), or cause the spell to violently explode (if she uses too much). Breaking the 7 Laws of Magic makes him more and more willing to do so again (e.g. killing with magic makes him more willing to use magic to kill again, controlling someone's mind makes him more willing to do so again, etc etc).

Notable Attacks/Techniques: For a complete list of the spells Alma is capable of, go here and look at Notable Attacks and Techniques tabbers "General" through "White Night"

Retrieved from "https://fcoc-vs-battles.fandom.com/wiki/Alma_Chronicle?oldid=208809"
Community content is available under CC-BY-SA unless otherwise noted.