FC/OC VS Battles Wiki
Register
Don't have an account?
Sign In
in: Tier 9, Characters, Grand Theft Auto,
and 18 more 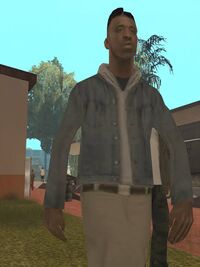 Alle Cheats is a character concept created by Kayra. A character who has full acces to every cheat code of GTA:SA, and few mods.

Gender: Varies, can appear as any character in GTA:SA

Powers and Abilities: Superhuman Physical Characteristics, Immortality (Types 2 & 4; Will always come back in an hospital upon death, can also kill himself on a whim), Self-Sustenance (Types 1, 2 and 3), Flight (With jetpack, planes and controlling gravity), limited Shapeshifting (Can change their shape to any character in GTA:SA), Weapon Mastery (very skilled in any weapon that exist in GTA:SA), Stealth Mastery, Vehicular Mastery, Martial Arts (Master at Boxing, Muay Thai and Taekwondo), Explosion Manipulation (With explosive weapons), Fire Manipulation (With Molotovs and flamethrower), Poison Manipulation (With spray), Teleportation, Gravity Manipulation (can increase and decrease gravity), Time Manipulation (can accelerate and stop ), Death Manipulation, Summoning (can summon most vehicles and civilians that exist in GTA:SA endlessly), Mind Manipulation (Can mind control people by looking at them and saying "G"), Invulnerability (with BAGUVIX, is resistant to firearms and melee attacks like punches) Resistance to Mind Manipulation (their mind exist outside of GTA:SA's reality, and wiews it as fiction)

Attack Potency: At least Small Building level (Can harm and kill Carl Johnson with few hits even when he's wearing a body armour, all of their weapons can kill CJ with few hits)

Speed: Subsonic (Far faster than CJ, killed him many times before he could react)

Standard Equipment: None normally, but can summon most, if not all weapons, planes, vehicles and civilians that exist in GTA:SA

Intelligence: Gifted. Has no problem outsmarting likes of CJ and Sweet, has full knowledge on everything in GTA:SA, is very cunning in battle, deceived and easily killed CJ on multiple occassions