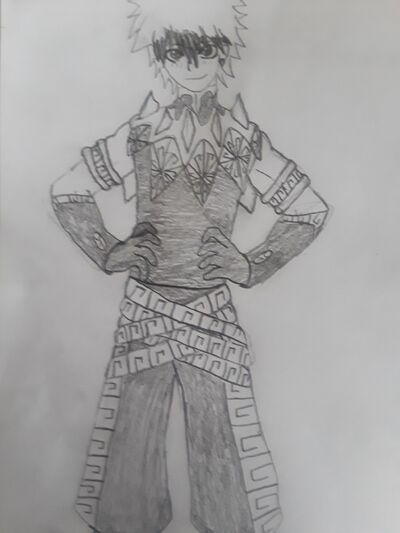 Ajitkumaar (Meaning: One who is Incapable of Being Conquered), a.k.a Aji is a strong young man born from the Uitverkore Kryger tribe. This tribe is a tribe of half African and half Indian people who live on an excluded island by themselves. The island is hidden extremely well by an holy barrier to the point that not even Lucifer can find it. On this island is where the "Sacred Heirs" are born. It is never known when a new Sacred Heir is born, but it is usually countless years after the current one dies. Aji and his sister Bhakti were born at the same time and both inherited the power of the Sacred Heir. The power is signified by the child being born with a diamond shaped marking on their head the disappears a few hours after birth. The Sacred Heir is a being who has the power to manipulate the various concepts and laws of the world and gain the power of the Mythological Gods. These beings are born in order to protect the world from any danger that threatens it. They are to either gain the power of the Gods or befriend them in order to protect the world.

3 years later Aji's parents conceived on last child. His name being Dayaveer. Despite him not being born as a Sacred Heir, Dayaveer had a naturally high Yuracion Energy level. This meant that he was destined to be a fantastic hero. Eventually, as the three children grew up, they trained in the ways of countless types of weapons. Aji specializing in swordplay, Daya in martial arts and Bhakti in artes. The three siblings promised to go on an adventure one day in order to explore the world and even the cosmos beyond.

On the day of Aji and Bhakti's coming of age ceremony everything went well and they even managed to talk their parents into allowing Daya to accompany them on their adventure. However, the moment they teleported off the island to the outskirts of an African rainforest something attacked Bhakti's mind. Suddenly she unleashed a Lightning Arte at Aji and Daya. It turns out that the moment they left the hidden island, Lucifer targeted Bhakti's mind and gained control immediately. The boys end up having to fight their sister and before they could knock her out, Zeus appears and deflects their attacks stating that "Bhakti is our Sacred Heir to control". With this, Bahkti was teleported away and was taken to Lucifer. Upset over the loss of his sister, Aji vowed to get stronger in order to save his sister. Both Aji and Daya (who was still broken hearted over his sister being taken away) soon went to Egypt and met the Yuracion Deva Atem who awakened Aji's power and boosted Daya's power in order for them to be able to face the Mythological Gods. From here Aji and Daya's adventure begins.

Aji is to be blunt...not very smart. He's a natural goofball who loves to have fun. He loves adventuring and is a very curious individual. However, one should not mistake him not being the smartest person alive to him lacking common sense. Aji is still very much aware of situations and knows whether he should truly trust someone or not. He is not naive to think everyone can be trusted and is also not someone who cannot read the mood. He can become serious when needed, however he is also a mood maker. He is good at making people smile and is overall extremely open and friendly. He is someone who one can easily talk to and is usually always in a happy go lucky mood. He's known for his bright and cheery smile that he gives others making people automatically attracted to him.

Despite all this, he is not 100% pure. When the situation calls he is more than willing to take a life if it mean protecting those he cares about or protecting the innocent. Aji is shown to have a dark side that only surfaces when he sees others mindlessly slaughtered or hurt and/or if his allies a brutally injured by a foe. In this state Aji becomes cold and heartless to his opponents and proceed to attempt to immediately kill his enemies without any mercy. He can still distinguish friend from foes even in this "rage state".

Despite not really being that smart, Aji is a masterful puzzle solver and can solve complicated puzzles with ease. This has debated to either him being a secret genius or just his luck. He is a masterful fighter who has mastery over many types of weapons and forms of hand to hand combat. Aji has a natural love for combat as well as working out. This shows that Aji doesn't like to stay still for long periods of time.

Aji is notable very dense and as such does not notice Amy's love for him. This is also due to him not really caring much for having a family in the future at the current moment. Aji is considered to be extremely good looking on top of his cheerful personality, making him a hit with the ladies. He has trouble understanding simple things at time and really can't pay attention to "boring lectures" and thus would often fall asleep.

Aji is stated to be an extremely brave person who is willing to step into dangerous situations without a second thought. This can be a double edged sword as this can lead him to trouble. He is the type of person who'd choose the more dangerous path for the challenge instead of the easier, equally rewarding path as he finds it boring.

Superhuman Physical Characteristics, Martial Arts, Flight, Fire Manipulation (Can burn the mind and soul directly. Can absorb fire to power himself up), Reality Warping, Death Manipulation, Soul Manipulation, Mind Manipulation, Quantum Manipulation, Matter Manipulation, Weapon Mastery, Power Nullification, Law Manipulation (Can write and rewrite almost any conceptual law), Time Manipulation (In the forms of time slow, stop, acceleration, reversal and erasure), Immortality (Type 8. Will continue to return to a battle as long as there is a single human who has ideals. Only when he enters his various Deity Modes), Resurrection, Void Manipulation (Can use Void Artes that manipulate nothingness itself), Empathic Manipulation (Can destroy one's will to fight with a glare), Passive Statistics Amplification, Instinctive Reaction, Reactive Power Level, Dimensional BFR (Can banish other outside the flow of time and can banish people into the Void Akasha in which erases all those who enter beyond nothingness), Pain Manipulation (Any pain done to him or his allies can be reflected back onto the opponent), Can kill Non Corporeal, Nonexistent Beings and Abstract Entities, Creation, Teleportation, Precognition (Can see his opponents' next move before they even think to use it), Causality Manipulation, Madness Manipulation (Type 2 with Nyarlothotep's powers), Chaos Manipulation (Nyarlo's powers naturally cause disorder within the space-time of the area and causes reality to oddly warp and spontaneously break down as well as create different disasters and even disorder in one's powers or one's existence), Perception Manipulation, Resistance to Elemental Manipulation.

Attack Potency: Island level+ (Far superior to Minotaur who just by releasing his power, was able to create a large scale storm that dwarfed Greece in size. Defeated Anubis in a one on one fight. Gained the power of Chronos, Thanatos, Izanagi, Hi-no Kagutsuchi, Asura and Thoth, albeit he can only use a fraction in his current state)

Stamina: Extremely High (Stated to be able to fight for days without tiring unless his opponent forces him to use a lot of his power)

Intelligence: Aji is a naturally skilled fighter who has mastered multiple weapons and martial arts. He is known for being able to adapt to any situation. He notably likes to consistently swap weapons and fighting styles mid battle in order to keep his opponents from getting used to his fighting style. This makes him extremely hard to read and predict. Aji has the voices of the Gods he has absorbed into his essence and thus they can help direct him in battle.

Weaknesses: Aji is someone who tends to rush in without thinking and thus can run into trouble that he perhaps cannot escape from.

Retrieved from "https://fcoc-vs-battles.fandom.com/wiki/Ajitkumaar?oldid=264039"
Community content is available under CC-BY-SA unless otherwise noted.