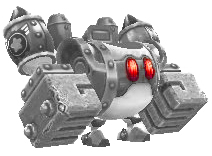 Aggressive Kirby is an original character based on Kirby who was made by Vrokorta.

Aggressive Kirby was originally from the Randomention. Before becoming a robot, he just looked like an angry Kirby. When the land was in danger, Aggressive Kirby & his friends went on a journey for power, so they could stop those who tried to do wrong. As he leveled up, he gradually became bigger & stronger. Upon reaching level 100, he basically became a sentient robobot armor. With the help of his friends, he was able to defeat the evil, & he became a defender of all within the Randomention, eventually leading to him meeting Tyanatris. The two became rivals after Aggressive Kirby beat him the first time, & their rivalry continues to this day, albeit they don't see each other as much anymore. Aggressive Kirby now resides in the Imagining Time multiverse, where he continues to fight evil.

Speed: MFTL+ (Kept up with Bad Tyanatris, comparable to the real Kirby)

Weaknesses: Aggressive, usually relies on brute strength as opposed to his many abilities

Retrieved from "https://fcoc-vs-battles.fandom.com/wiki/Aggressive_Kirby?oldid=155363"
Community content is available under CC-BY-SA unless otherwise noted.