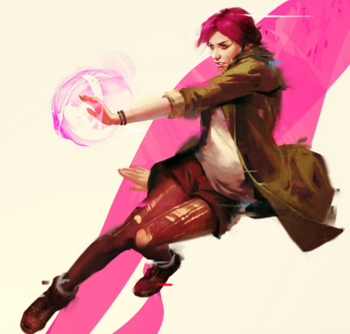 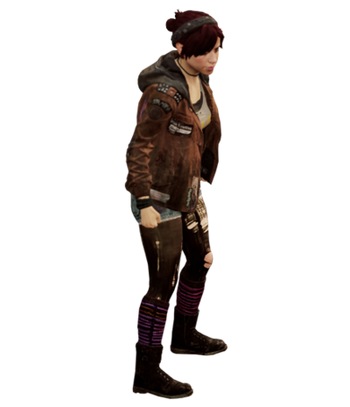 Abigail Walker, more commonly referred to as Fetch, is a Conduit who can control Neon light and energy. She is the tritagonist in InFAMOUS: Second Son, and the main protagonist of InFAMOUS: First Light. She is the third playable protagonist in the inFAMOUS series, following Cole MacGrath and Delsin Rowe.

Following her escape from the Department of Unified Protection after seven years of detention, Abigail set up her base in Seattle, where she began targeting drug dealers for what they had done to her and her late brother, Brent. She later encountered another Conduit, Delsin Rowe, and became a major ally of him, helping him take down the DUP's director, Brooke Augustine alongside another Conduit and ally, Eugene Sims.

Tier: At least High 6-A. Higher with Rage Power

Powers and Abilities:  Superhuman Physical Characteristics, Regeneration (Mid-Low, Low-Mid via absorbing energy), Longevity, Immortality (Type 3), Enhanced Senses (Can see objects and enemies through walls), Aura, Healing, Statistics Amplification, Neon Manipulation, Levitation, Mind Manipulation (Planetary Scale. By targeting an enemy's weak points, she can completely take control of their minds, and can easily make them do her bidding. She can control large groups of enemies at once), Matter Manipulation (Macro Quantum. Can destroy targets on a macro-quantum level leaving them as nothing but a cloud of photons and light particles. Can be used passively with regular attacks), Explosion Manipulation (Can destabilize matter to the point of making it explode with one attack), Forcefield Creation (During her fight with Delsin, she could create bubble-like forcefields that repel attacks and send nearby enemies flying), Air Manipulation (Can fire powerful blasts of neon wind), Stasis Field Generation, Gravity Manipulation (Can create gravity singularities that draw in all enemies and objects before violently exploding, instantly atomizing enemies and sending flaming debris flying in all directions), Time Manipulation (Her stasis bubbles freeze targets in time, and is capable of freezing enemies in time just by hitting them with Neon Bolts), Transmutation (Can turn matter into energy and absorb it), Intangibility (Can turn into neon light to phase through attacks and objects), Afterimage Creation, Invisibility, Rage Power (Becomes increasingly stronger the more intense her rage is), Durability Negation, Homing Attack (With Neon Missiles), Attack Reflection (With Neon Blasts), Limited Reactive Adaptation (Conduits gain new powers and abilities by stressing their powers in different ways. In moments of extreme duress, their bodies will develop new powers to best aid the situation), Accelerated Development (Conduits are naturally able to hone their abilities through training for short amounts of time), Limited Electricity Manipulation (Fetch can overload electrical objects with her neon energy to suit her needs, and can hijack particles in targets brains to enslave them), Technological Manipulation (Can hijack machines and repurpose them to suit her needs), Duplication (Can create neon duplicates of herself to aid in combat, and either inflict mental damage or explode on contact), Resistance to: Disease Manipulation/Biological Manipulation, Poison, Matter Manipulation/Transmutation (Macro-Quantic level. Delsin's matter-altering abilities had no effect on her), Mind Manipulation (Planetary Scale), Soul Manipulation (Planetary Scale), Spatial Manipulation, Existence Erasure, Absorption (Of matter and energy), and Time Manipulation (Stasis fields will not freeze her in time whether the move is performed by Delsin or herself)

Speed: At least FTL, likely higher (Much faster than before. Capable of circling the planet in seconds. Comparable to Post-RFI Cole)

Intelligence: High. Was a straight-A student in school, and is extremely adept in strategic combat and urban warfare. Received highly advanced, militaristic training in Curdun Cay by Augustine personally. And took down Seattle's entire drug-smuggling operation.

Weaknesses: Has a history of mental instability and suffering from panic attacks, which will often put her in coma that can last for several hours.

Retrieved from "https://fcoc-vs-battles.fandom.com/wiki/Abigail_Walker_(InFAMOUS_Extended_Universe)?oldid=161631"
Community content is available under CC-BY-SA unless otherwise noted.