FC/OC VS Battles Wiki
Register
Don't have an account?
Sign In
Advertisement
in: Characters, Pokémon, Pokémon Glitches,
and 14 more 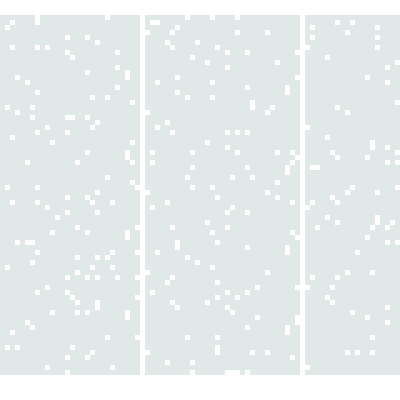 ----- is a Normal-type Glitch Pokémon from the fourth generation. It is obtained through cheating or through certain glitches, which involves trying to send nonexistent Pokémon into battle.

This Glitch Pokémon is defined by its lack of characteristics. As it represents an absence of Pokémon, it has no attack besides Struggle and cannot be interacted with. Opponent Pokémon aren't able to target it and the game will usually consider a battle over if it is the only living Pokémon on one side.

Powers and Abilities: Superhuman Physical Characteristics, Flight, Invisibility, Nonexistent Physiology (Type 1, possibly 2. ----- exists as the absence of data for a nonexistent pokémon species. Most of its characteristics except for its name are derived from this void attempting to use incompatible data around it to fill it. Its true level of nonexistence is not clear, but as it does not exist in the very data of the game itself, it should be beyond the game's narrative idea of not existing. It cannot be perceived by anyone and opponents cannot target it due to it, even if they know its existence. It can only be conceptualized as "nothing" by others), Mind Manipulation (Its nonexistence might cause its opponents to attack each other, as they are unable to target it), Information Manipulation (Can mess with information involving it), Power Mimicry (It will passively copy the speed of allies), Void Manipulation (Its existence can cause parts of information about itself to be erased. Trying to talk to it will cause the entire game to crash. Beings entering in direct contact with it will be erased from existence, even including the likes of Arceus or ----- itself), Non-Physical Interaction

Attack Potency: Below Average Human level (Has an attack stat lower than even Magikarp's. It can only deal damage through Struggle). Likely Low Multiverse level through crash (Can cause the game to crash, which destroys the current iteration of reality. This crash should be similar in scope to crashes in other games, which can destroy multiple universes)

Speed: Transonic (Should be as fast as a standard Magikarp), potentially up to Infinite (Can copy the speed of any allies it has, up to the speed of the likes of Dialga)

Durability: Unknown (Does not exist and cannot be attacked)

Standard Tactics: Will only attack when it is forced to, such as when it must attack alongside an ally

Weaknesses: Can only directly attack under certain circumstances