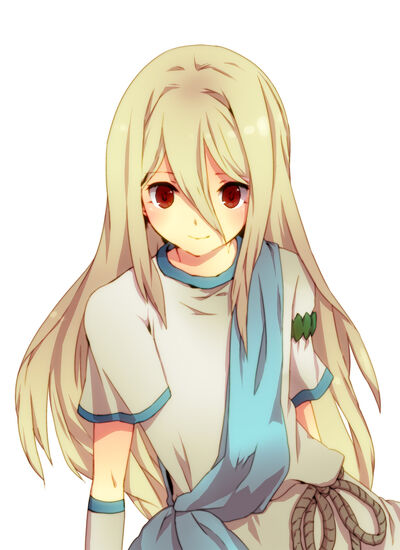 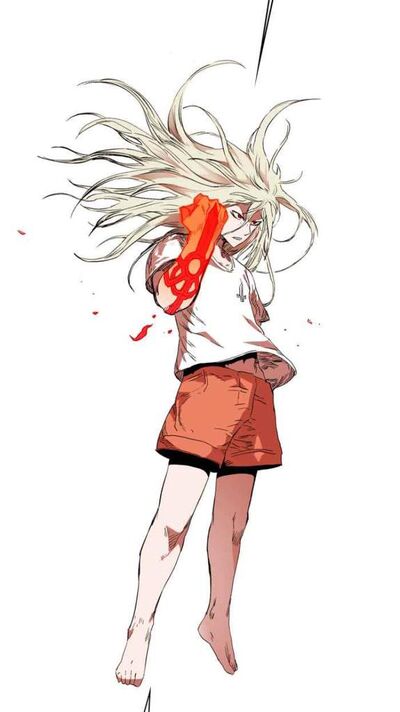 (Note, I own none of this art, all rights go to their respective owners)

'God' is apparently a God-like being that claims to be able to send souls to the afterlife. So far, he has shown such power to do so. Wielding powers to wipe out entire armies and be a threat to every single kingdom at once, he truly is something else. His true name is Entity, but hides his true name under many layers.

'God' takes on the appearance of what appears to be a prepubescent teen in a white robe, a light blue sash hanging from his right shoulder that is tied on the left hip, having platinum hair and red eyes. He also has multiple necklaces around his neck with one hanging lower than the others, having a blue gem hanging from it. When being serious, his red eyes flare up and his arms are lit up with red energy, which excite the magicules in the air to the point of creating near anything.

Despite how he looks, 'God' is a consistently prideful being, getting bored easily. He is also very rash and prone to anger, such as his anger to the king for not killing the Scions. Despite this, he is also a very charismatic person, very easily swaying others to his side.

Age: At least 1000 years old (Watched civilizations grow from the moment they were born. Has claimed to be this old.)

Values: The destruction of the 'Lich' and Scions

Affiliation: The Kingdom of Horus (Is in good relations with its king)

Previous Affiliations: 'Lich' (Tried to coexist together, didn't work out)

Powers and Abilities: Superhuman Physical Characteristics, Immortality (Types 1, 2, 3, and 5: An ageless being, is able to shrugs off wounds that would normally kill others and simply regenerate from it. Is barred from death itself.), Regeneration (Low-Godly: If his physical aspect were to ever be killed, he will simply regenerate from just his consciousness), Holy Manipulation (Blasted 'Lich' back with a blast of holy light), Energy Manipulation (Controls energy), Telekinesis (Lifted entire mountain ranges casually with his mind), Aura (Can unleash an aura so great that it pushes others back due to the sheer pressure), Magic, Law Manipulation (Can manipulate the laws of the world to how he sees fit. Whether how the magic system works or not), Matter Manipulation (Molecular: When going serious, a red light ignites in his arms that excites the magicules in the air. From here he is able to manipulate these to create whatever he likes), Elemental Manipulation (From the magicules in the air, he can forcibly produce water, air, fire, and earth), Immortality Negation (Types 1, 2, 3 and 5: Was able to grievously wound 'Lich' to the point where he was near-death. Even though he has the immortality as him), Soul Manipulation (Is able to send souls to the afterlife), Dimensional Travel (Sends souls to the afterlife, which exists as a Train travelling across universes), Precognition (Is able to view time as if it was a video, saw ahead into the future), Probability Manipulation (His grasp on magic always makes it work, even though magicules are random), Fear Manipulation (The pressure of his aura frightens anyone within a 5 meter vicinity), Space Manipulation (When going serious, his mere footsteps bend space), BFR (Through sending souls to the afterlife), Invulnerability (Conventional weaponry made by humanity such as bows, arrows, swords, cannons, and ballistas are unable to harm him. However weapons that are able to excite magicules in the air can harm him), Resistance to Absorption (Resisted the effects of the 'Lich' tying to absorb his life force)

Speed: At least Relativistic+ (Far faster than Titus who was able to see explosions as frozen and even move during that time) | FTL+ (sees lightning as frozen (11c))

Stamina: Very High (Could go on fighting for days, if not months, on end)

Intelligence: Above Average (Is smarter than the average man, but has shown no notable intelligence feats)

Weaknesses: Some of his powers do not work on mortals, such as his Immortality Negation as it only works on 'Godly' beings such as the 'Lich'. Is unable to send souls to the afterlife unless their physical body is dead. The Necklace allows him to send others to the afterlife and if stripped away, is unable to.

Retrieved from "https://fcoc-vs-battles.fandom.com/wiki/%27God%27?oldid=312966"
Community content is available under CC-BY-SA unless otherwise noted.